You may recall a recent post on City Jackdaw all about Neolithic art, featuring artifacts and carvings of up to 40,000 years old.

Well the following creations are only a few months old. They were put together and shared on Facebook by an old school mate of mine, Scott Stringer. His partner questions his sanity, but my kids love them, so I thought I would share some of them with you.

Whoever said art had to be cerebral? 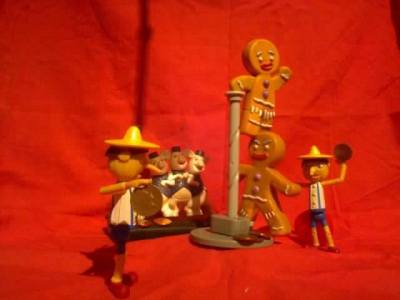 ‘Now, Which One Of You Squealed?’ 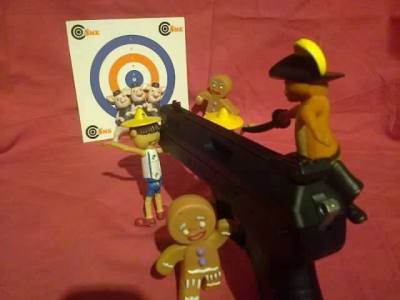 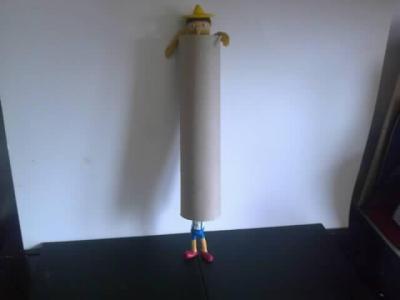 ‘As Elton John May Have Said: “It’s No Sacrifice.” 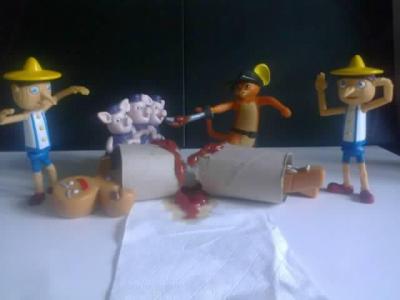 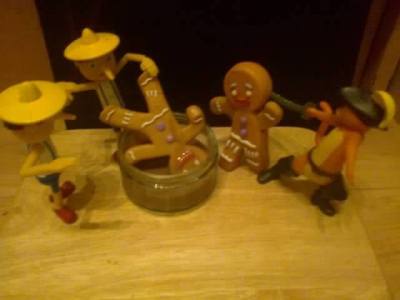 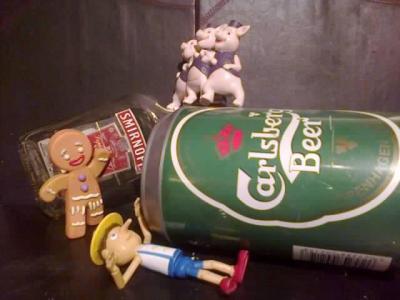 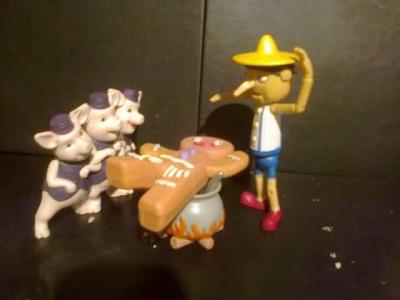 ‘Could This Be The End?’ 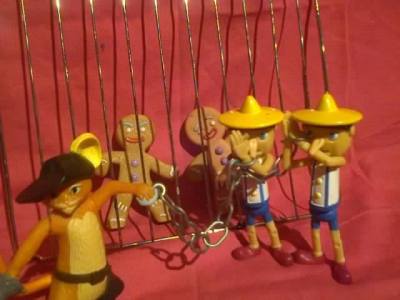 Could this really be the end? Is Scott’s next stop Tate Modern? Or Park House, after his other half finally has him sectioned? Tune in next week for further insights into his disturbed psyche, featuring toilet rolls, gingerbread men, and the Facebook Share button.

Perusing, like you do, a collection of quotes on culture, I came across this quote by William Bolitho:

“General jackdaw culture, very little more than a collection of charming miscomprehensions, untargeted enthusiasms, and a general habit of skimming.”

Now if I had not spent a fortune on curing myself of my deeply ingrained paranoia, I would swear old Billy was talking about my blog.

A habit of skimming? Definitely.

Tune in for more of the same after the weekend.

See you on the flipside.

As he approached the promontory, he wasn’t expectant. He was distracted by two of his favourite things-granddad and balloons. (“Boons! Boons! Purple boons, blue ones!”) His £1 fishing net may have been a give away, but he clutched it possessively without seeming to understand what it signified.

His older sister, of adventurous spirit, never hesitant or unsure, raced on ahead, disappearing from view as she mounted the steps then descended the other side. As James clumsily made his way up, I got ahead of him, determined to be in a position to see his reaction on first sight.

Using his granddad’s hand for support, he reached the top, tottered slightly, then looked in front. Those bright blue eyes of his, made even bluer in reflecting back the summer sky, widened, fixing firmly on the distant horizon.

Such a simple, short word, but the way he uttered it, the way he drew it out, held such greater significance, and made my heart leap in a shared acknowledgement. He turned his head slowly from side to side, scanning the whole panorama. Taking it all in. You could see it, he lost all sense of scale, and from that first momentary shock, the great expanse created in him the impulse to run.

And run he did. In wild abandon, all thoughts of balloons and fishing net discarded. He ran over the sand towards the sea, still some distance away, then veered this way and that, giggling as he moved, until finally, breathless, his little legs faltered and he came to a stop.

Then he became The Castle Rascal.

His sister Millie employed use of her bucket and spade to build a sandcastle, decorating it with a single seashell on top. But as she moved to build another one, he was in like a shot. Kicking it over and doing a celebratory, in-your-face-sister jig. “Nur-nur!”

“James!! she shouted angrily, but he already had his sights on her next castle, and she quickly headed him off, defending it ably like a knight of old.

He turned his face towards the sea, and was lost again. A moth caught in the thrall of the flame.

He set off towards the approaching tide, intent on acting upon its open invitation. Occasionally he would flinch as the shadow of overhead gulls skimmed across the sand towards him, seemingly to snatch him up, but he continued on. I stayed where I was, with his mother and his sister, watching the two figures of him and his granddad become receding, diminishing points. Allowing the moment to become a shared bonding of two different but connected generations.

If ever I lose my sense of wonder about this world, if ever my awe falters and I begin to take it for granted, the surefire remedy is to view it through the eyes of my delighted children.

I helped my wife search for shells to be the crowning glory of my daughter’s new castles. 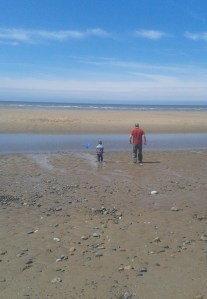 As I write this, there is a service taking place at Westminster Cathedral to mark the 60th anniversary of the coronation of Queen Elizabeth II.

I would not consider myself a Royalist, or a Monarchist, or any other such ist that you may attempt to attribute to me (careful) but I can appreciate the sense of history and the sense of occasion. I know people of other nationalities who tell me that they envy the history and tradition that we have with our monarchy.

Marrying a post on national history with a little family history, I share with you this photograph from the 1953 coronation taken on Birtles Street in Collyhurst, Manchester. In that sea of young faces, among that wild throng, my Dad stares out. Also present are his two brothers, along also with two of his cousins.

As well as being a visual document of a historic occasion, I treasure this for being one of only a handful of photographs that exist of my Dad’s younger brother Frank, who was to die just twelve months after this was taken aged not quite four years old. That is him dead center, wearing the coat, his head turned to his right. 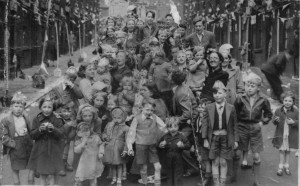 Another photograph being shared by Manchester Down Memory Lane today is this one capturing the women of Walter Street, Manchester, getting ready for their street party.

Look at that for elbow grease! How times have changed. 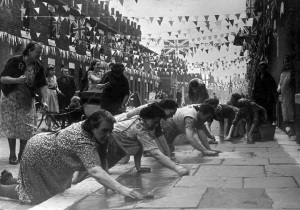 I have photographs from the Silver Jubilee party I was at in 1977, but I decline to include them  here as I do not want to inflict upon you the unsightly vision of my young, knobbly knees, laid bare in shorts.

Back then nearly every street held a celebratory party, with everyone contributing to the decorations, food and drink. I can recall one of the neighbours rolling out an out of tune piano to add to the caterwauling.

Come the Diamond Celebrations of 2012, and only a handful of the streets in my local area bothered to hold such parties. The national flags and bunting were as sparse then as they were this year for St.George’s Day. But when we have a World Cup or European Championship year, or for events such as the recent London-held Olympics, you can see them in abundance.

It seems that up here, in the north of England at least, there is a dearth of national pride until a sporting event awakens that slumbering sense of patriotism and brings the people together in a mutual air of hope.

But that hope inevitably disappoints, and the mood of the nation takes yet another dip.

Or, as of recent days, the death of a local serviceman calls the community to come together in a mutual need for solace, and comfort, and hope.

But parties? Royal celebrations? The jury is out. 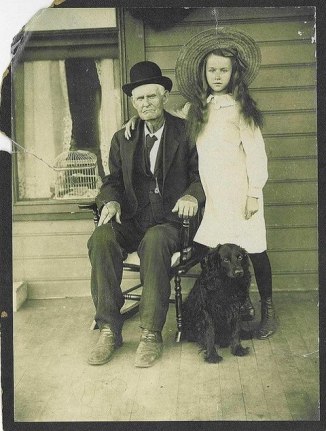 ‘Mary with her Grandfather Jasper, around 1900’