Those damn Gremlins have struck again.

My PC has lapsed into a permanent vegetative state.

I have a techno guy who I habitually haunt. I ring him at work, greet him quite affably with a “Hi, are you okay? So, I’m sat in front of my PC…..” There will be a small, resigned sigh, followed by “Go on…….” Then he will baby walk me through a minefield of headspinning gobbledygook.

He then got wise to me and started fielding my calls. I mean, how many meetings can you be in in one day? So I would ring him on my wife’s phone and it would be his turn to be all affable: “Hi Jen.”

So I am currently waiting on said techno guy to jump start my flatlining computer. I am letting you lot know as, until then, Jackdaw will only be able to do some short fledgling hops as opposed to longer, migratory flights. I am limited to what I can do on my iPad.

Not as many nice, shiny pictures.

I could perhaps use a scribe, someone I could dictate to (in a non-Hitler type of way).

I think that would be kinda cool. Anyone out there fancy being the Sosthenes to my St.Paul? The Adam to my Chaucer? In a paint-by-numbers sort of way.

I once read that Mark Twain’s wife used to go through his work and remove all the swear words. I will make it easier for you-I promise not to pollute your ears with my filthy vernacular.

And I will throw in a name check with a few smiley faces. Or emoticons, as those technical people call them. You wouldn’t get that with St.Paul.

“Hey, techno guy! What about you? Fancy being my scribe? What do you say?”

Charming. Now those are some words that we won’t be able to use.

I suffered from a real blast from the past this week when I saw this photograph of Wendy James from the group Transvision Vamp: 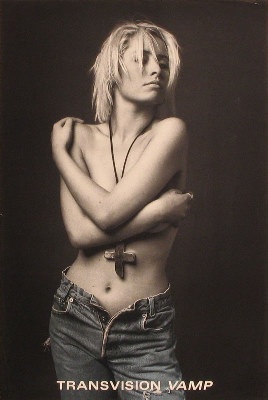 For a period in the late eighties, this very image of this shy, retiring lady adorned the wall of my bedroom. Always playing it cool, showing no interest in me whatsoever. Despite that look.

I think I only knew two songs by Transvision Vamp, and I only liked one of those. I eventually gave the poster to a school mate who would cast admiring glances at it every time he called around for a beer….I mean, for us to work on our homework together.

My aloof, taciturn ex by all accounts spent the next few years nailed high upon his bedroom wall. The things she must have witnessed. If only she would talk.

I think, like me, he didn’t know that many songs by her group either.

For twelve months now the Jackdaw has flown, no longer the fledgling that he once was. Riding the high air currents, descending low to roost, his perspective always tinged by his north west habitat. Appreciative always of those cousins who have observed his flight. Those who accidentally entered his territory, and then left. Those who consciously decided to nest in the same tree as he. The migrants and the indigenous ones. The silent trackers  and the communicative callers. The Jackdaw appreciates and acknowledges them all. In the dark of dusk he wonders what the future will hold, how he can adapt to an environment that is irrevocably changing. Come the first blaze of dawn he forgets all of this, and takes once again instinctively to the sky.

It’s not often that the wife and I get an afternoon to ourselves. I thought that I would give our stolen hours a brief mention. City Jackdaw is not exactly Dear Diary, but Notes On A Life, is, well, just that.

We went into Manchester to visit the English Academy that we had recently became a host family for, having had an Angolan student living with us for the past few months.

The plan was to make sure that the lad had been attending lessons and not going to the pub each day (I’m joking-we had not been to the place before and just wanted to have a look around) and then go for some lunch.

We found the building, cased out the joint, then made our way into Piccadilly Gardens. Breaking with the usual Manchester custom, the sun came out and blue sky hung over us like an old, long absent friend. 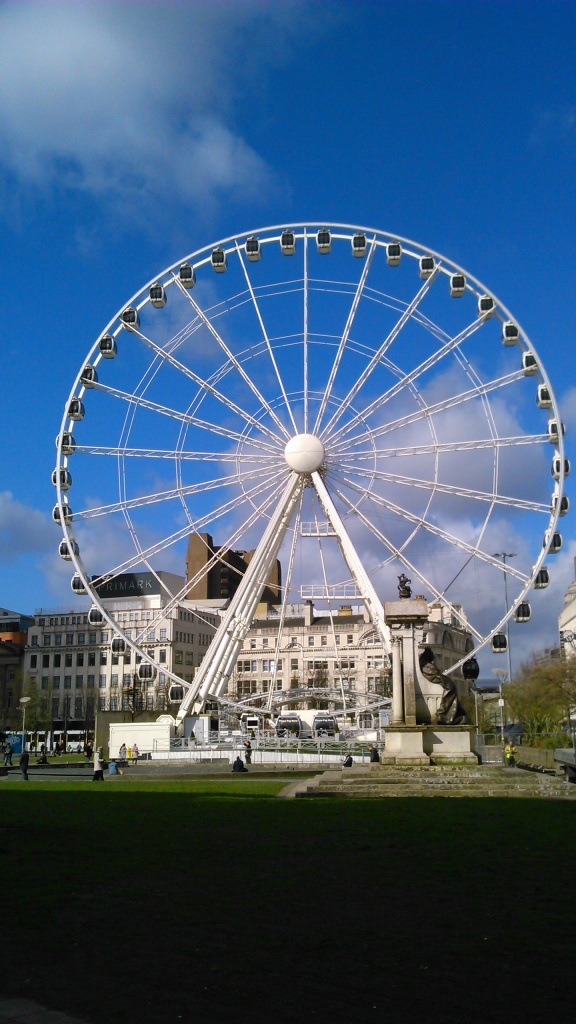 We had been on the Manchester Wheel before, but when it was situated at Exchange Square. Of all the previous visits that we had made into the city center, the day that we had chosen to rise high above the city was not inspired. It was pouring down with rain and the windows were steamed up, so our cataract stricken views were limited.

Not wanting to ride that train again, metaphorically speaking, we passed it by and within a few minutes, looming large on the horizon was the National Football Museum. 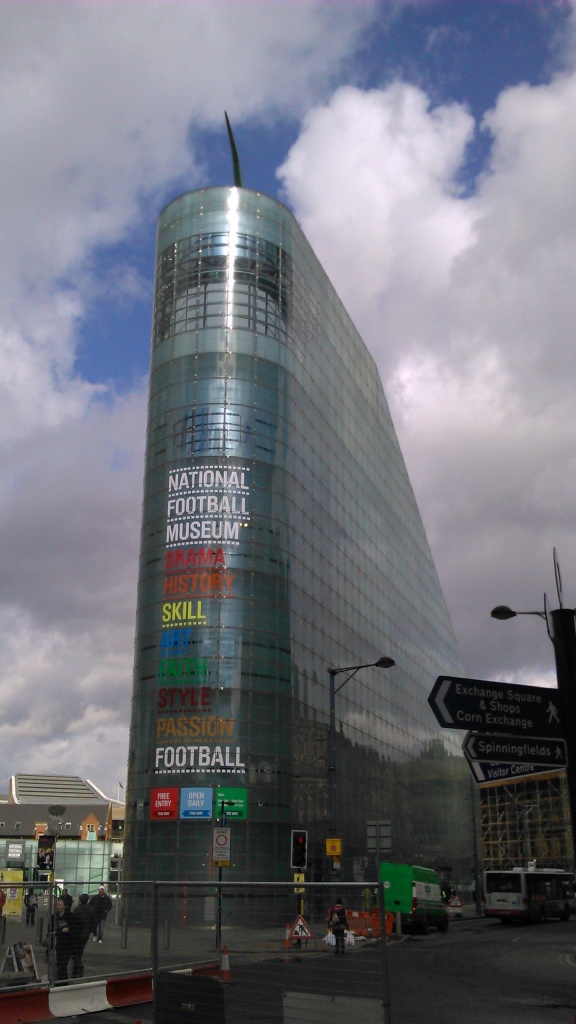 Perhaps there was even an area where I could put Jen in goal and take some shots at her?

You can see from the photograph that by now more cloud was beginning to gather, and my wife’s mood was similarly beginning to darken.

I had a sudden flash of insight-a eureka wave of self-survival. I decided to postpone the football museum for another rainy day.

Knowing the way to my wife still being known as my wife is through her stomach, I suggested that we now go for a bite to eat. Jen led me at once into Nando’s, situated in The Printworks. Chicken Chambers turned out to be alright for this sceptical veggie.

After this, aware that the clock was ticking and that the kids would be revving up their engines at school and Gran’s house respectively, we walked back to the car which was parked just on the city center limits. Above us the perennial battle between the powers of light and darkness went on. By the time we reached the car park, just one day after the Spring Equinox, we were assailed by a storm of cold, hard hail. 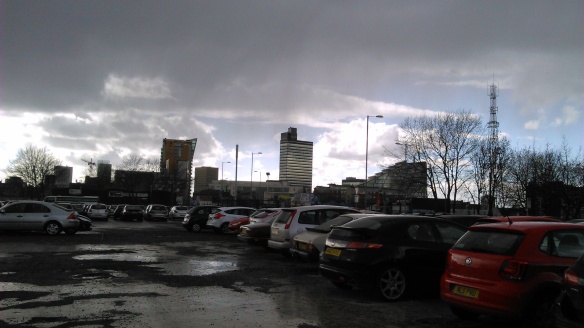 You guys know what I’m like with old photographs.

I came across these three when writing my ‘Claws For The Weekend:Admissions’ last Friday. Although that was a light-hearted post, this is an altogether darker post, if not a little disturbing.

This first photograph is from around 1869, and was taken by Henry Clarke of a patient in a restraint chair at the West Ryding Lunatic Asylum in Wakefield, Yorkshire.

Does this old man have an air of defiance, or of being subdued, about him? Or was he incapable of experiencing either feeling? 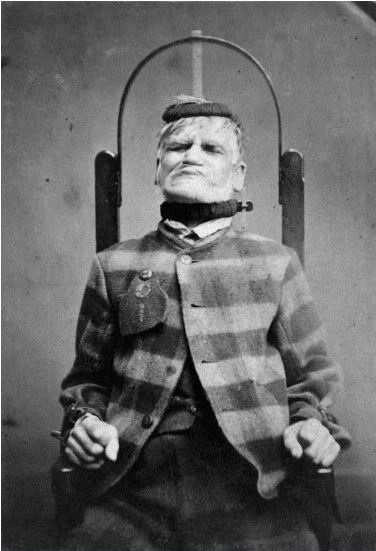 This is another photograph by Clarke, from around the same time, of a patient being restrained by warders. I know that sometimes restraining patients was done for their own safety, or for the safety of others, but there is something about how he is being held by the hair to be captured by the camera that is disturbing. 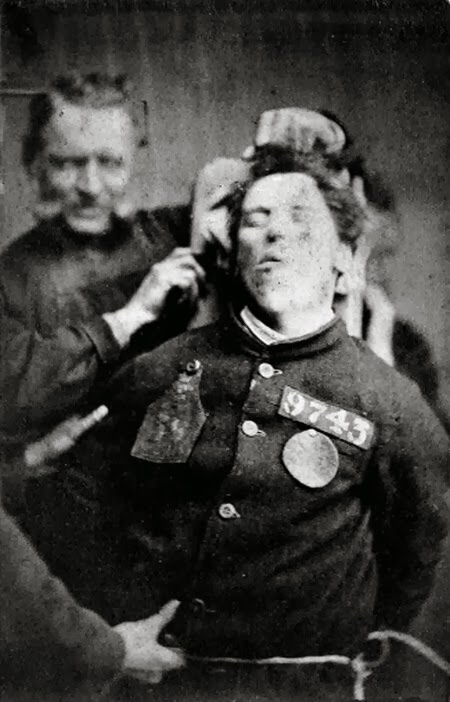 This last photograph, of which I know neither the photographer nor the location,shows a seemingly isolated patient in restraints.

Looks like a still from a horror film doesn’t it? 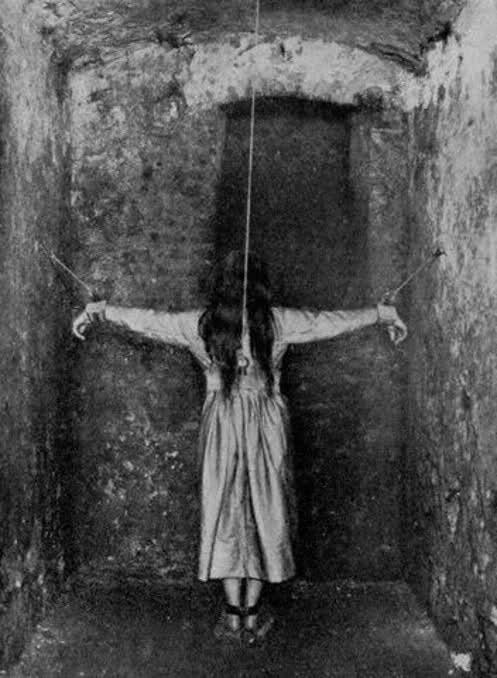 My wife worked for a while in a psychiatric hospital. And even though she and colleagues were trained on how to restrain patients for the safety of everyone concerned, the term used was ‘care and restraint’, with the emphasis on care.

Thankfully today, the practice is, or should be, done in a more dignified manner for everybody involved.

Yesterday the annual Manchester Irish Festival, St.Patrick’s Day Parade took place. Every year it seems to get bigger in both size and popularity. Alas, I did not attend as I went on a windswept walk-more on that later.

I just wanted to wish all of you Irish people out there, and all of the people with Irish roots (including the millions of people here in Britain, many ignorant to the fact) a Happy St.Patrick’s Day. In researching my family history, I have uncovered four different Irish branches on my own tree, up to now, so I will lift a Guinness today in acknowledgement of their struggle and to the contribution that they made to me just being here today. 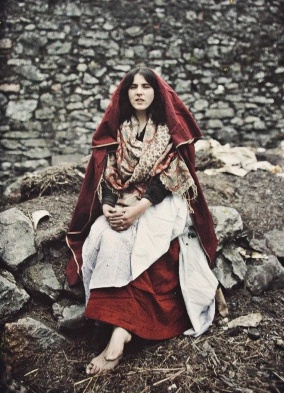 A few days ago it was the 71st anniversary of this little girl’s death, so I decided to reblog this.
Her face still haunts me.

The last post that I added to City Jackdaw was all about the wonder and splendour of this beautiful world that we live in. Today’s post is about a darker aspect of this same world, an aspect that we shamefully bring to it. I came across the story of Czeslawa Kwoka by accident.  I had never heard of her before, but it was the photograph that drew my attention. I could not stop looking at it.

Czeslawa Kwoka was born in Poland in 1928. This beautiful girl was to die in Auschwitz in 1943. Not a Jew, she was a Polish Catholic girl who was sent to Auschwitz along with her mother in December 1942. Within three months, both were dead.

I have never been to Auschwitz. I did go to the Terezín camp when I was in Prague a few years ago. Although used as a ghetto and not…

In regard to my blog, I think it highly appropriate and desirable for me to be photographed with one of these on my arm, don’t you? Of course, I am talking about the Jackdaw. My pet The photo series: http://ift.tt/1hYilF8
by johnny4ka
–FUN WID US
Entertainment Guaranteed

This is a list of reasons to be admitted to a lunatic asylum in a period of the 19th Century. 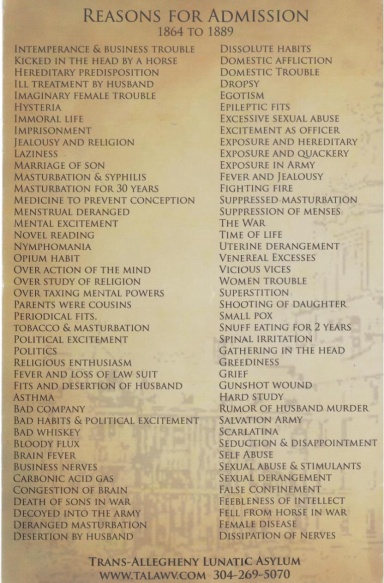 Have a great weekend.

See you when you get out.

This is the debut post of a great Welsh lass who used to live in Manchester and now finds herself living in Denmark. Incidentally, I also used to go to school with her 🙂
Check her out and give her a nice WordPress welcome people. Maybe even a follow 😉

From the Valleys to the Flatland

So, here it is, the long awaited, much nagged for blog. I cannot promise to blog regularly, nor can I promise that each entry will be light hearted and fun, but, I can promise that they will be honest, truthful and will give a glimpse of the life of an ex pat in Denmark… welcome onboard 🙂