Today, as I am sure you will be aware, is the 70th anniversary of the D-Day invasion. I intend to watch the many programmes commemorating the event today, my thoughts no doubt turning to my two Grandfathers who took part in history’s largest ever land invasion. I know next to nothing of their own, personal D-Day stories. I know very little of their time during the war full stop. Like so many, it appears that they didn’t speak too much about it. And by the time my own curiosity had grown, it was too late.

One of them died of cancer before I was born, the other died when I was twenty years old,  at a time when I had yet to fully develop my great interest in history, and in particular my own family history.

I do wish I had asked. Either them, or other older relatives who may have known more. 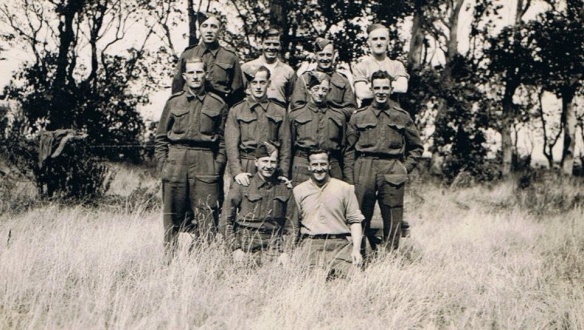 This was my Grandfather James Brown, short sleeves, back right. He was a Gunner in the Royal Artillery.

In the months leading up to D-Day, all leave had been cancelled with plans and preparations being made, and troops undergoing training, as everybody knew that the Normandy invasion was imminent. Definitely coming, it was just a matter of when.

However, on the 28th of April James’ wife gave birth to twins-a boy and a girl. That girl was my mother. James was briefly allowed home to see his two new children, along with his wife and other son, before having to return again to his unit.

That is as much as I know of his involvement in this historic event. He would return home once the war had ended, but die from cancer in 1951, those twins being only seven years old. I never met him, but I have always wondered. My son is named after him. 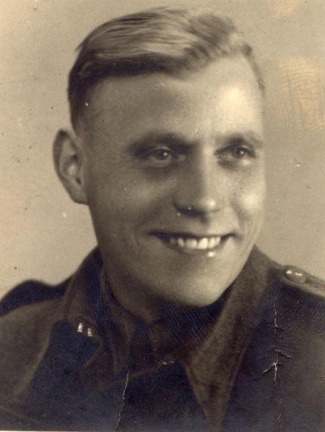 This is my other Grandfather, Fred Murray. He was a Sapper in the Royal Engineers.

The only reference I ever heard about him and D-Day was from my Dad, who told me once that his Dad was ‘one of the last out of Dunkirk, and one of the first over on D-Day.’

At Dunkirk he was trying to salvage what equipment he could as the great evacuation was taking place. While he was on that beach, back home his first child was being born-my father, with no-one at the time knowing the danger that he was in.

There is the story too about how, when he finally made it back, while he was sat in a local pub in Collyhurst, Manchester, having a pint, a local cobbler took his boots away to  repair for free. They were in a sorry state, his toes poking out of the end, after the many days marching he had done to get to the Dunkirk beach in the retreat.

But in regard to Normandy, in 1944, I don’t know exactly what his role was, but as a Royal Engineer it could be that he was involved in the building of the temporary Mulberry harbours.

I have war records. I have lists of dates and countries. But the personal stuff, the human stuff, will probably be forever lost.

I wish I had asked.

I will watch as many of the commemorative programmes that I can today, with both of these men on my mind and in my heart.