The Cornerhouse, in Manchester, is a three floored cinema and centre for independent films and visual arts, comprising also a bar, a cafe, and a bookshop. What else do you need?

I was there a few months ago to watch The Gospel According To St.Matthew. The director, Pasolini, chose Matthew from the four gospels as “John was too mystical, Mark too vulgar, and Luke too sentimental.” The cast comprised mainly unprofessional actors and locals from where he shot the film, and he cast his own mother in the role of the elderly Mary. I’m sure psychoanalysts would have a field day with that. He also threw in a few writers and poets, and Jesus was played by a nineteen year old economics student from Spain. I bet that got a few mentions at the next student party. Especially when they were running out of wine.

There was also a rather lovely Angel of The Lord. 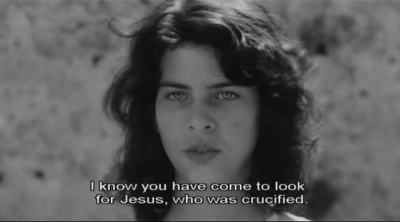 Realising that I would be passing through a meal time when watching this film, I brought with me a chocolate bar and a drink and settled down for the film. My big mistake was that I should have got everything out and opened, ready, before the film began.

A few minutes in, I tried to dig out my Snickers bar. I don’t know how it happened, but the inside of the plastic carrier bag had suddenly acquired the dimensions of the Doctor’s Tardis, and I just could not locate the chocolate. In the dark I was hunting around slowly, painstakingly slowly-honestly, as quiet as I could, but I was acutely conscious of a woman, sat alone a few seats away from me, beginning to display irritation at my vain, searching rustlings. Where the hell was my Snickers bar? She gave a sharp glance in my direction. Even in the darkness I could feel her unvocalised wrath. Finally, finally. I found the bar, sliding it ever so slowly out of the bag. But then, could I open it? Try as I might, I just couldn’t open the blasted thing. It was obviously child proof. After a few moments of failed, surreptitious fumblings, my neighbouring viewer suddenly whiplashed in my direction, roundly “Shussshhhh”ing me.

Okay, I know I may have been impinging on her enjoyment, but it’s not like she would miss anything-the film, being in Italian, had subtitles to guide her along. Unless she was trying to pick up the lingo.

In the interests of world peace and a play for sainthood during my lifetime, I abandoned the chocolate and lay myself open to hunger pangs and rumblings.

But if this irritated woman thought that would be the end of her trials, she was mistaken.

A few rows in front, there was a big guy, a big guy, sitting alone. As soon as the lights dimmed, and the film began, he started to vigorously rub his eyes. I am sure she found this distracting. I could see the outline of her lips purse. Her silhouette, rigid and tense.

For a while he continued to sporadically rub at his face, as though washing, at one point stretching out his arms high above him with a deep, uncensored breath. Then about half way through the film his head began to slump. There were a few quick jerking movements of the head as he tried to check his slide into unconsciousness, but then he was gone. When we reached the point on the screen when the cross bearing Jesus was hoisted high, using ropes, the guy started to move sideways.

Like a great, hulking ship, he slipped over to the right, and as he did so his legs began to slip out into the aisle to his left. Forgive me, but my attention was now not on the crucifixion and ascension of Christ but rather on the descent of this man.

A woman going to the toilet had to step over his legs on the way.  I think my woman friend on my row would have stamped on them.

On the screen, Judas Iscariot committed suicide. As he hung himself, the soundtrack suddenly plunged into silence. I am sure that this would have been most effective-if it wasn’t for the snoring.

It rattled out of him, bellowed out of him, if a sleeping man could bellow. Well by this point the woman was well pissed off. She inhaled and exhaled deeply, and kept tilting her head like a bird. Unfortunately for her the slumbering man was out of prodding distance. I contemplated making another bid for my Snickers bar under cover of snoring, but decided against it. It may have just tipped her over the edge. And I was in range.

She seemed to tremble everytime his lips made that curious, raspberry-blowing motion. He slept on, right through the command to make believers of all nations. As the film came to an end, he began to stir.

The lights came on, and behold: his great resurrection into blinding brightness. The woman jumped to her feet and fled to the door in rage. The man got up, oblivious to it all, and yes-he was rubbing his eyes.

I opened my chocolate. I wish I had crisp.

11 thoughts on “How To Piss Someone Off In The Cornerhouse”