The much better film of a double feature release (the other being the dreadful Straight On Till Morning), Judy Geeson plays a woman recovering from a nervous breakdown, who is attacked by an intruder with a prosthetic arm. Soon after this she moves, along with her new husband, a teacher, to the country, where he has a new job at a boys’ school. At least she will be safe in the country, won’t she?

Of course not, this is a Hammer film.

A further attack happens in her new home, but, due to her previous mental health problems, her husband Robert (Ralph Bates) doesn’t believe her. She meets the headmaster of the school, the unsettling Michael, played by the ever great Peter Cushing. We soon learn that Michael has a prosthetic arm. Now I’m no Sherlock, but this could just be a clue, couldn’t it, as the number of people that you meet with a false arm you can count on, well, one hand?

Peter Cushing should have gone to Specsavers.

One night, alone and tormented, Peggy shoots Michael and flees. The next morning, when Bob returns, she neglects to tell him what has happened. Finding blood, used cartridges, and a damaged door, (but no body), Bob try’s to put the pieces of the jigsaw together, and hunts for Michael’s body.

Eventually, we learn that the villains of the piece are actually Bob, in cahoots with his lover Molly, (played by Joan Collins), who just happens to be Michael’s wife. Keeping up? They have set up Peggy to kill Michael for them. 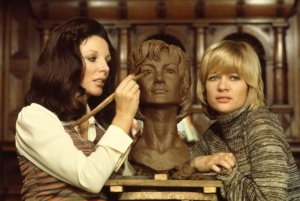 Call me unreasonable, but the fact that Molly has made a clay model of Peggy, and likes to thrust sharp implements into the eye, should have set alarm bells off. Nice cardigans though.

In the end the unstable Michael, who we learn is the headmaster of a school that, like Molly’s model, has no pupils, comes to Peggy’s rescue and we are left with the image of Bob hanging from a tree.

The things you have to do for art.

An entertaining thriller with good performances all round. 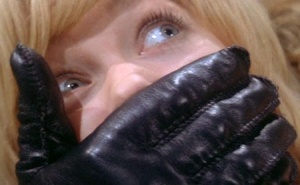 Whatever you do, don’t let Peggy have a go of the Karaoke.

That’s right, keep her away from the mic.

Too late:”You know you make me wanna shout…” (Clears the room. No wonder the school had no pupils.)

2 thoughts on “Hammer Chooseday #2:Fear In The Night”