(Things have got heavy here on City Jackdaw, understandably so. This will be, I think, my final post on the Manchester bombing. At least for a while. And here are some final photographs: some inspiring, some personal, some heartbreaking. Thank you for acting as witness with me.)

There are still many armed police on the streets. I saw one heading for the Gents toilet in the Arndale shopping centre. “Do you want me to mind that while you go in?” I asked him, indicating his gun. He laughed. I’ve seen other officers reassuring children, placing their helmets onto young heads for photographs.

Meanwhile, outside, still the flowers grow.

Real bees-Manchester bees, were flying among the thousands of flowers, unthwarted by the barrage of moving tethered balloons.

There was a subdued air compared to the earlier staunch triumphalism, the knee jerk refusal to be cowed.

My two youngest children and I.

Then, somewhere beyond this transformed square, a lone piper began to play.

A woman took a photograph of her little girl, stood in front of the flowers. “I’ll show you this when you grow up.”

“I don’t want to grow up,” she replied. I can understand why.

Everywhere: an alternative message to hate.

Remembrance of the twenty two. 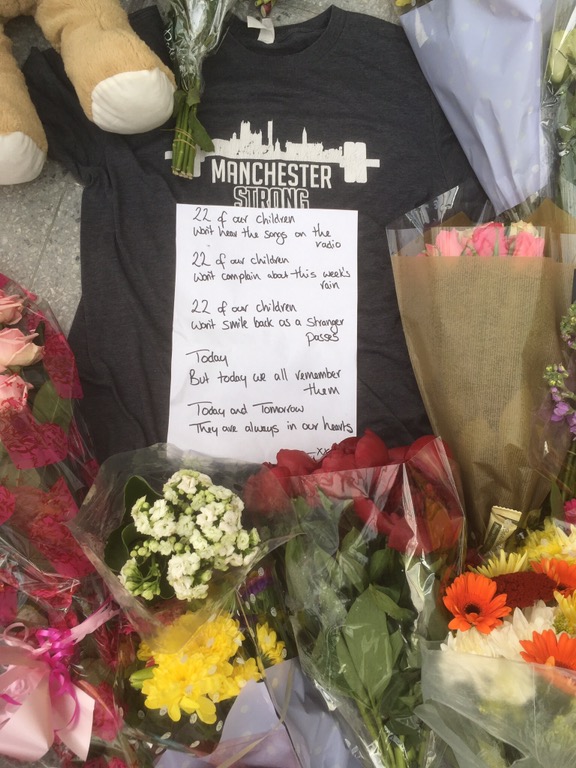 And messages to ourselves; to each other: 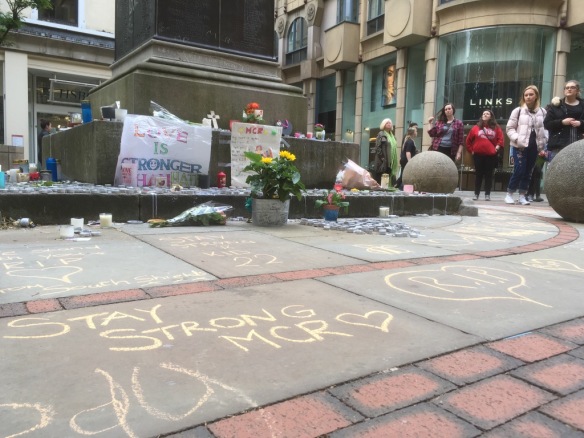 My kids stayed a little longer, quiet and thoughtful among the reflecting figures.

This place of memorial draws the creatives: the musicians; the poets; the painters. I’ve seen them everywhere, and of course I’m one too. Bleeding our art through open wounds.

Victoria train station, through which the Arena (site of the bombing) can be accessed, has now reopened. Samaritan volunteers were present everywhere, handing out cards for anyone who may need help. Above the platform scaffolding shows where the damage is still being repaired, draped by one of the We Love Manchester signs that adorns the city.

And also this, a memorial to the dead, and a tribute to the people: 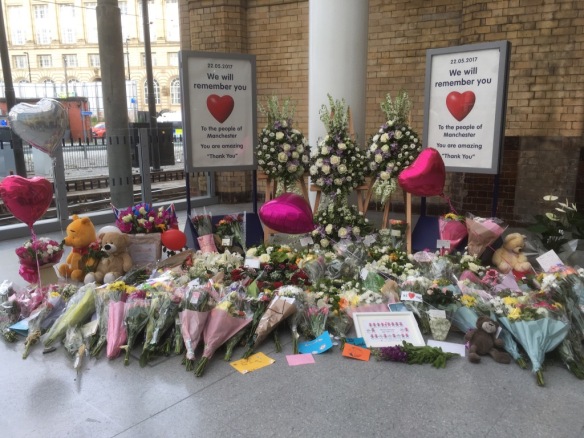 This has been laid, naming and depicting the dead as angels. The five males in white, the females in pink, the girl with the balloon the youngest victim, eight-year-old Saffie.

I left the centre still, even more so, a proud Mancunian, moved by the resolve of the Manchester people.

24 thoughts on “A Final Manchester Post: Still The Flowers Grow”