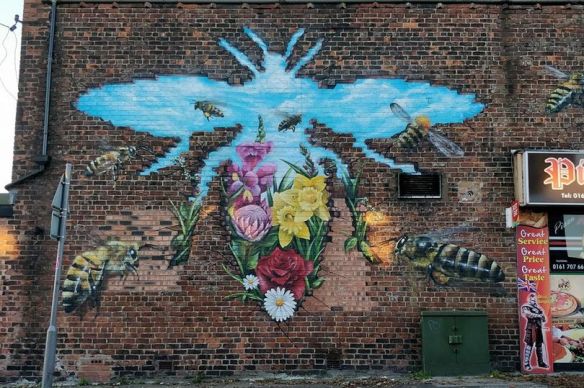 Russ Meehan, aka Qubek, is an artist whose work can be encountered during any walk around the Manchester area.

His murals feature throughout the region, including a huge image of 22 bees in the Northern Quarter, which represents the 22 killed in the Manchester Arena attack.

Meehan was asked to do the mural by Marc Gallanders, a graphic designer who set up the Bee Strong MCR in a bid to spread positivity in the wake of the Manchester bomb, and help children and adults have conversations about what happened. His project supplies worker bees which will be placed across Greater Manchester in a show of condolence and solidarity.
The 22 bees mural – a tribute to those killed at Manchester Arena was created in Monton.
Gallanders says: “We decided on Monton as I live there and a lot of the local schools had children directly affected by the attack, and we wanted to spread the love and the message of togetherness beyond the city centre.

“As months have gone by since the attack, we wanted the piece to help move the city and the community forward with a symbolic design.”

The new painting gives the illusion that bricks have been taken out of the wall, revealing a garden with bright flowers, blue skies, and of course – bees.

Meehan explains some of the symbolism in the work: “The flowers have all got meanings – I went through a library of flowers and read through what each of them meant.

“Snapdragons, they symbolise grace and strength, and in the same family there are some statice – which aren’t fully in bloom in the picture, they’re just behind the daffodils – they are a symbol of remembrance and symbolise sympathy and success.

“The rose at the bottom symbolises love, when you think of all the love which poured out of Manchester I thought that was a nice symbol to put in there.

“Also the rose is red because of Lancashire. Daisies symbolise innocence and purity.

“On the left hand side there’s a flower called the king protea, that stands for change and transformation and it signifies daring and resourcefulness.

“The daffodil, it’s indicative of rebirth, new beginnings, and eternal life. Now I’m not really very religious, but I think that’s a nice meaning, it’s like the flowers and the piece is in remembrance to those who have passed away. It’s almost like they’re living on through the art work.

“The bees represent the people of Manchester: hardworking individuals around the city. I didn’t want to drag it up again… I wanted to make a piece of art that celebrated not just the people who were there on the night but everyone in Manchester.

“It’s an overall celebration of people, and the love that people have for each other in this city.”