I’d tried to prepare my son. You know, just in case.

I’d previously been to Wembley three times. The old Wembley once, this new Wembley twice. Three visits to the renowned, fabled stadium. And three times I’d seen my team get beat. I’d once proclaimed that I’d retired from Wembley. Who’d have thought that of a Manchester City fan, a few years ago? But then my boy came along.

“Even if we lose,” I’d told him, “you’ll get to experience Cup Final day. A match at Wembley. You will come back again.”

I needn’t have worried. For once everything went as planned. A crushing, 6-0 win and quite a memorable day. An historic domestic treble, although this was actually our fourth trophy of the season.

When the fourth goal went in, the man sat on the other side of my son hugged him, and then said to me, while beckoning towards his own young boy: “They don’t know how lucky they are, do they?”

I knew what he meant. The 90’s were a nightmare. Schooldays were insufferable.

“What do you think we’ll win this season?” James had asked me back in August.

Listen to him, I thought, the new City fan. Full of expectation. 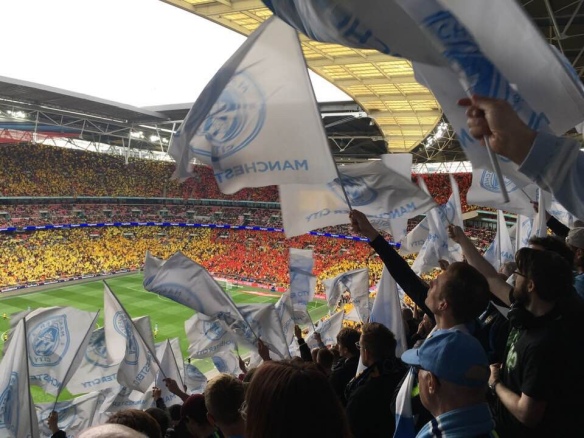 There is a ‘knowing’ among we older fans. A wisdom built on pain. But on Saturday we could forget all that, that part of our DNA was lost in celebration.

And the music was great, too. Belting out adopted, and adapted, anthems by Mancunian bands such as Oasis, James and Joy Division. And that certain band from up the East Lancs: The Beatles.

Before the game I met up with some familiar faces from my past, camaraderies of work place and youth.

I never got to go to a City game with my Dad, but I know the stories. The ’56 Trautmann final. He and his friends reported missing, later found sleeping in an otherwise empty train in the Manchester sidings.

I was conscious I was making new memories for my lad. Life is all about passing on the baton. Saturday was a marker for him.

And then Monday night, a time to celebrate in our own backyard, my son and daughter decked out with replica kits and flags.

We went into Manchester to see the victory parade, as the Manchester City players milked the acclaim while showing off the four pieces of silverware that they’d won this season.

And to say goodbye to Vincent Kompany, our most successful captain and our leader, whose stature is just as great off the field. An adopted Mancunian from Belgium, he had married a local girl and wanted to give something back to the city that had given him so much in his eleven years here. He’d set up, with the mayor of Greater Manchester, a charity called Tackle4MCR, to help the city’s homeless, and all of the money from his testimonial year was going into that.

It was loud and jovial, (blue) Mancunians at their best, people gaining vantage points from bus shelter roofs and clinging halfway up lampposts, singing songs and cheering on their heroes.

I suddenly imagined another use for one of those trophies. 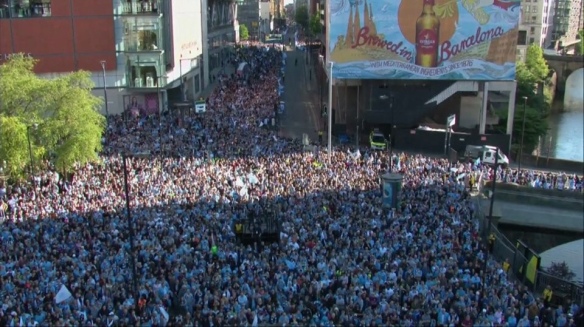