In his time as a City supporter during the fifties,sixties and seventies, my Dad saw two great teams. One was the cup team that made it to the FA Cup Final in the consecutive years of ’55 and ’56. The other was the Mercer-Allison team that won several trophies in the late 60’s and early ’70’s. A team which boasted such great players as Bell, Young, Lee, and Summerbee.

Great though these players were, when pressed he always said that his favourite all time player was Bert Trautmann.

His was a great story both on and off the field. A youngster in the Hitler youth, he went on to become a paratrooper, being sent to fight in Russia in World War Two. He was captured, but managed to escape. Being captured again, and expecting execution, he was, however, greeted by a typical British “Hello Fritz, fancy a cup of tea?”

Held here in Britain as a prisoner of war, he declined to return to his homeland when the war had finished, marrying a local girl. When Manchester City signed him to be their new goalkeeper, there was a lot of animosity directed towards him due to his German roots, the local Jewish community, as well as the general public, angry at his arrival.This was just four years after the war.

Especially at away games he drew a lot of vitriol, but slowly, gradually, he began to win people over with his great, courageous displays. Playing in London for the first time, he received a hostile reception, enduring shouts of ‘Kraut’ and ‘Nazi’. In this match he was particularly brilliant, and when the game ended he received a standing ovation from the crowd, while the players from both teams formed lines to applaud him from the pitch. That slow transformation of how he was perceived by the post-war British public spread.

His most famous moment, which seems to overshadow the rest of his extraordinary life and career, came in the 1956 FA Cup Final at Wembley, when he was injured rushing out to block Birmingham’s Peter Murphy, diving at his feet.

After receiving treatment he played on, making further crucial saves despite being dazed and in obvious pain. He helped his teammates win the match and thus lift the trophy. It was three days later that it became apparent that he had played the last seventeen minutes of the match with a broken neck. He had dislocated five vertebrae in his neck, the second being cracked in two. The third wedged against the second, preventing further damage which could have cost the German his life. 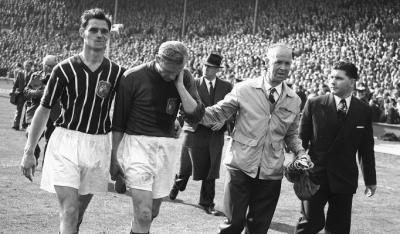 My Dad was at that game, and often told me the story, of how, unknown to him the extent of his injury, Trautmann risked his life by again diving at the feet of an oncoming attacker. Broken neck and all.

That was probably the final cementing into public affection the figure who had provoked so much anger and hatred at the start of his footballing career in England. Just a few months after this match, Trautmann was to suffer the tragedy of losing his firstborn son in a car accident, aged just five years old.

His role in restoring English and German relations acknowledged, Trautmann was awarded the OBE in 2004.

I am too young to have ever seen him play, but I have been at Manchester City matches when Trautmann has attended and been announced onto the pitch either before the game or at half time, and have witnessed the obvious affection and high esteem in which the supporters, particularly the older supporters, held him. He once said that he was born in Germany, but that in his heart he is British.

A legendary figure both on and off the pitch, I have had his biography for some time but haven’t got around to reading it yet. I think now is the time.

Here is the footage of Trautmann’s finest hour-the 1956 FA Cup Final. See the supporters with their rosettes, rattles and Woodbines. A one-armed referee.

And a legendary performance.