I love them, but I am haunted by the people in them.

I am not talking about spirits or spectres.

What it is that haunts me is a sense of absence.

The absence of the people in the photographs themselves-the fact that they are no longer here with us, their energy and essence now gone, creating a vacuum where they once took up space.

But it is not just an absence of the people that haunts me.

I am haunted also by the absence of resolution.

In most cases our questions remain unanswered, we will never know who these people were, what was in store for them after these photographs were taken. Did they go on to have good lives? Were their lives a success, or a struggle? Did they escape the squalor? Do their lines continue down to us today?

It is the human need to know, which cannot be fulfilled.

An absence of resolution.

This photograph here was taken in the late 1800’s on Church Street in Whitby, that great historic town situated on the Yorkshire coast. A place where Dracula makes a strange bedfellow of St.Hilda.  I have been there many times, walking along that same street which leads to the 199 steps that climb up  to St.Mary’s church and the abbey ruins. The next time I am there I will have this picture in my mind’s eye, overlaying the present scene with this 19th Century one.

The one man band, the curious crowd.

I am conscious sometimes that I may read into the scenes that I survey on film my own ideas and understanding of the periods in which they were taken . But sometimes there are signs that act as indicators of the poverty, or conversely, the affluence, of the people involved.

Look at the two little boys to the right of the photograph.  Their backs are to the camera, their faces forever lost to us.

One child is barefoot upon the cobbles, the other child wears a boot on one foot while his other is bare, with some type of rag or bandage wrapped around his ankle.

But it is another person in the photograph who draws my eye.   To the left of the photograph a girl has spotted the photographer, and casts an inquisitive glance in our direction. In doing so she is forever connected to us. A curious glance that bridges the centuries.

After the shot was taken, maybe she turned back to the spectacle that first attracted her. And then what?  The performance over, what destiny took her from this moment of immortality? Did she escape from this Yorkshire town, perhaps swept away in a great love story, becoming a mother and grandmother along the way? We will never know.

In shifting scenes and shadows she is gone from us forever. But her image remains. An unknown person trapped in a particular place, a particular time. 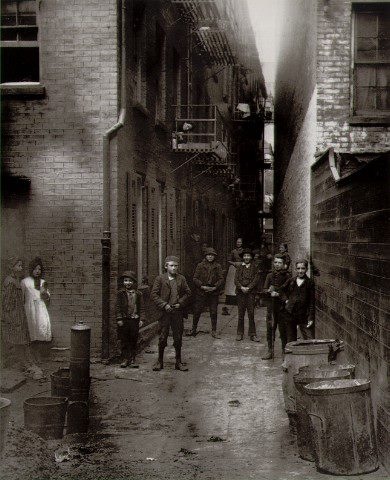 I like this photo-Ragamuffin Alley. This motley crew look like Fagin’s gang. Perhaps that is Mrs Fagin looking down from the upstairs window.

You could imagine the two girls stood to the side, talking about the boys assembled here, the way girls have done since time immemorial, whispering behind coy smiles.

And what of the boys themselves? From our vantage point we know the spectre of World War One was looming ahead. Were any of these lads called to shores they had no expectation of  ever being able to visit?  Do any of them still lie somewhere on foreign soil?

Last year I stayed for a few days in Rothesay, on the Isle of Bute, Scotland.

There is a hill there known as Canada Hill. After tearful, emotional farewells on Rothesay Pier to loved ones who were leaving for a new life in Canada, relatives would scramble up this hill in order to catch a last  glimpse of  the ship as it disappeared from view.

This photograph here was taken of emigrants en route to Canada. It doesn’t convey a sense of excitement at the prospect of new beginnings. You can see people huddled together in shawls and blankets against the cold. The women, the fulcrum of the families, gathered together in the center, before them young lads huddled conspiratorially in conversation.

Was their journey a matter of choice? Were they compelled by necessity, by desperation? How many people alive today as proud Canadians owe their lives and nationality to the people captured in this photograph, making the courageous decision to make the journey to an unknown, New World?

I think of that vantage point now known as Canada Hill. People clinging to each other, families cleaved in two, watching a vanishing, ever diminishing shadow sail through the still water of the Firth of Clyde. Capturing one final, internalised  image from the far horizon, in the days before telephones and Skype, to replay over and over on cold winter nights. Dreaming about loved ones, not knowing. Waiting for news.

I love old photographs. But I am haunted by a sense of absence.