You may have to humour me a little, but to Whovian geeks it is a big deal.

Then a newspaper reported that over 100-yes 100- long-lost episodes had been found in Ethiopia. It sounded like our Nag Hammadi watershed moment. But experience has taught us to take things with a pinch of salt.  But the excitement was building.

Then came an announcement from the BBC: several missing episodes had been discovered, although the number claimed wasn’t accurate.

You had to feel for my wife, Jen.

Since the over 100 claim, I had been regaling her with the myths concerning the missing 106 episodes. How the BBC in their wisdom had wiped or destroyed many of the early stories featuring the first two Doctors, and ever since the rise of videos and dvds they had been searching high and low to reclaim copies. How some episodes have turned up on church fairs and in garages, and how some were located in the dust gathering vaults of overseas broadcasters.

In 1991 every episode of The Tomb Of the Cybermen, part of the Who Holy Grail, was found in Hong Kong. Finding a story in its entirety is fantastic, as it tends to be just the odd episode of missing stories that turn up, and even then it is a rare find.

There is a DVD, fittingly entitled Lost In Time, that gathers together various isolated episodes from stories that we have had to accept will never exist in their totality again.

Having initially read the ‘over 100 episodes’ claim, I admit that I may have casually mentioned this once or twice in conversation. I know I definitely spotted Jen’s eyes roll a couple of times. But I had to remind myself nothing had been confirmed officially. Try to keep a lid on it.

Being a long time fan of this great British instituion, my favourite Doctor was always the one who held the mantle when I was a kid-that great eccentric Tom Baker whose scalf was a sharp reminder to knitters everywhere to not get carried away. 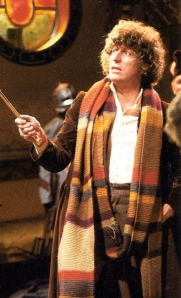 Do you remember him Jen? Do you want a jelly baby?

These are the old ‘classic’ Doctor Who stories, before they were reinvented with the benefit of high budget special effects and made into short, fast paced stories for today’s generation of kids who don’t have the attention span to sit and watch six or seven episode stories. Back in those days I didn’t think there had ever been any other Doctors-the Doctor was Tom Baker. Who the hell had heard of someone regenerating?

Wasn’t that something that worms did?

I can still recall being knelt up in front of the tv on the Saturday that the Doctor fell from that dish at Jodrell Bank, and turned into Peter Davidson. Emitting a ten year old’s confused and high pitched  “Who is that?” No pun intended.

I shared such stories with Jen. Cue deep sighs and rolling of eyes. She is a poet and she doesn’t want to know it.

For the sake of my marriage I kept things to a minimum. Tried not to speculate. No news is good news.

Then a BBC spokesman played things down, saying  the 100 episodes in Ethiopia claim was ‘inaccurate’. But when asked if there were some episodes to be announced at a forthcoming press conference, admitted “There is a connection.”

What the hell did that actually mean- inaccurate, but a connection. I couldn’t contain myself.

Jen they have found some new ones! Or rather new old ones! But if it’s not 100, how many? 90? Could we dare to dream, Jen, could we? Why couldn’t they just tell us which ones? Or was it just the country that was innacurate and not the figure? Why are you doing that thing again with your eyes Jen?

A press conference was scheduled for the beginning of the week-as the day approached my wife was conspicuous by her absence. The imagination went into overdrive-would they be Hartnell or Troughton stories? Great though the first Doctor was, the second Troughton is a close second to Baker as my favourite. Clips like this, featuring both Doctors so not to give the game away, added to the anticipation:

Unbelievably, no time was given as when the conference was taking place, so I intended to arm myself with the tv remote for teletext and my Ipad  for Google search. I would have preferred a ‘breaking news flash’.

“We want everything to be ready for this announcement to excite fans so they will have to wait a few days longer. They have been waiting nearly 50 years for this , so a

I tried to rip open my cushions with my teeth. My dog scarpered upstairs, and Jen blocked my calls.

Somewhere, in the dark BBC corridors of power, a Machiavellian tyrant was rubbing his hands and chuckling ‘ that jackdaw guy will be ripping out his feathers!’

News then leaked that old Doctor’s companions Frazer Hines and Deborah Watling had been invited to help make the announcement, which indicated that the found episodes would indeed be from the Troughton period, as this was the Doctor that they had both worked with.

Finally, finally, the date of the reveal in which the episodes would be announced, and a couple of them screened, was given as Thursday, betwen 3.30pm and 7.00pm.

What the hell? A three and half hour window? Why could they not just give the damn time? Was I going to have to trawl the internet again for hours? Just how long was they going to string this out for?

Millie’s toy Winnie the Pooh was launched into the kitchen.

I made a mental note for when the time came: don’t create a scene while the kids are eating…keep quiet while Jen is reading. Time passed by. Several googles of ‘Doctor Who episodes found‘ was returning nothing but old news.

I boiled in silent frustration. The night wore on with nothing. Then:

The conference had been held, the episodes revealed but, the BBC had

I apologise now for the language as I apologised then. Jen almost scalded herself with her cup of tea, the dog briefly levitated. Thankfully, thankfully, the kids didn’t wake.

I responded to Jen’s shrieked questions with a barrage of incoherent quick-fire staccato garble.

Someone who pulls the strings was really getting off on this.

But, this is the best bit- screw you BBC, this is the 21st Century! News leaked out through Twitter and Facebook. Your cold war capers don’t work anymore.

There were new episodes, Patrick Troughton ones too! There were nine, okay, not 100 as promised by that damn second rate journalist, but I think the confusion was that the amount of missing episodes in total numbered 106. But anyhow,new episodes, episodes long written off as lost to us, had been recovered. Regenerated even, from a tv station in Nigeria.

Episodes 1,2,4,5, and 6 of the six part story The Enemy Of The World was now complete as there was already episode 3 in the archives. And now the six part The Web Of Fear was missing only episode 3. As the audio soundtracks to all the Doctor Who stories exist, this last story would no doubt be released with the missing episode replaced by an animated one, as had been done with other stories that were missing just the odd episode.

I knew Jen was familiar with this trailer for a more modern Doctor Who story:

so in order to try and sell her a bit of enthusiasm for The Web Of Fear, I replaced the excitedly given line

“Dinosaurs, on a spaceship!” with

“Yetis,  on the underground !” 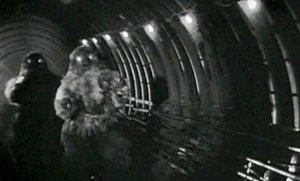 She looked, then said “They look like fluffy teddy bears gone wrong.”

Deep breaths. Forget you heard it. Put the heavy PC down.

Never mind. I am already looking forward to my Second Doctor Night.

And the number of missing episodes now has fallen from 106 to 97.

There must be more out there. We have to keep looking

Jen stop doing that, you look like Marty Feldman.