One of the very first posts I did on this blog was about this book that I read:

It was about the 19th Century Manchester gangs, described as the very first youth cult, known as Scuttlers. (Search on my blog Gangs Of Manchester, as I still can’t work out how to post links on an iPad.)

Last night my wife and I went to the Royal Exchange to watch a play entitled Scuttlers, the initial inspiration for the writer being, of all things, the Manchester riots of 2011.

It was the first time I had been in the Exchange since I visited with my English Literature class, back in ’88, to watch To Kill A Mockingbird, and I loved it. I think I could really get used to sitting there in the round.

It was a great cast and a great production. I loved how, at the end of the play, the story linked those young gang members with the young people of today. After one of the characters dies in a clash, a girl implores the everyday people going about their business on the streets not to walk in the spot that he lost his life.

That is someone’s blood! A man died there!

But nobody pays any heed, they continue to walk along the path where the victim had lay. Then, as the girl continues in vain to stop them, her voice decreases as those 19th Century pedestrians gradually become people wearing backpacks and hoodies, attention fixed upon their mobile phones and iPods, the setting morphing into the present day.

People still tramp those same Ancoats streets, unaware of those in whose footsteps they walk in, and as in this case, the very spot that they died in. It was very effective.

After the play ended, we left the theatre, and as we descended the steps the immediate sight that greeted us was a group of teenagers at a bus stop, shouting and kicking out at each other.

The connection worked. There is continuity. 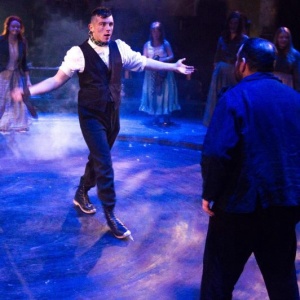