I enjoyed reading this tonight, Marie’s ghost story for Christmas.

I recently had a message from a friend asking whether my short story ‘The Ice House’ had ever been published. Well, yes and no. It was read aloud to …

A Ghost Story for Christmas

I love these ‘then and now’ montages, showing the ghosts of East End London.

The footsteps we step in; the breath that we breathe. 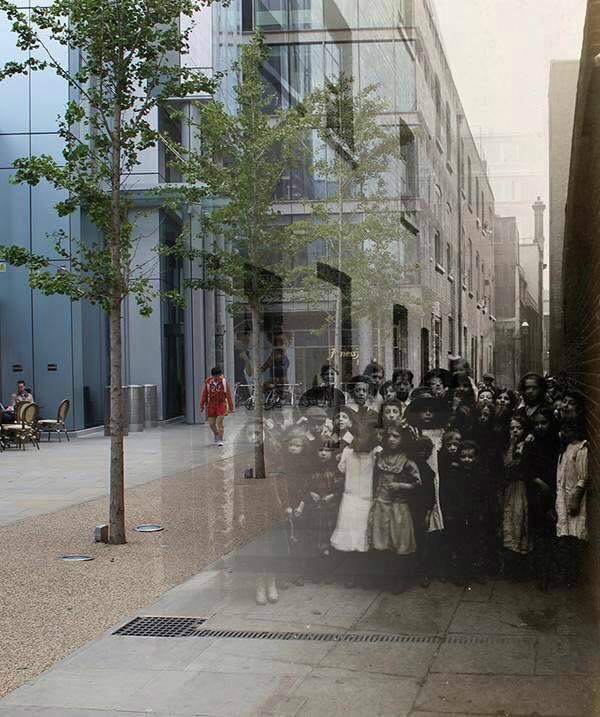 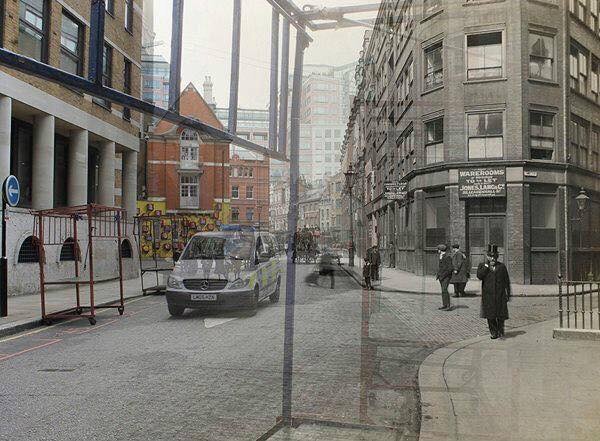 Taken in the early 1880’s, this is one of the earliest images of the East End of London.

I love the way the children appear insubstantial and ghost-like, which in effect they are. Lingering echoes of lives long lost, wandering along now vanished streets. 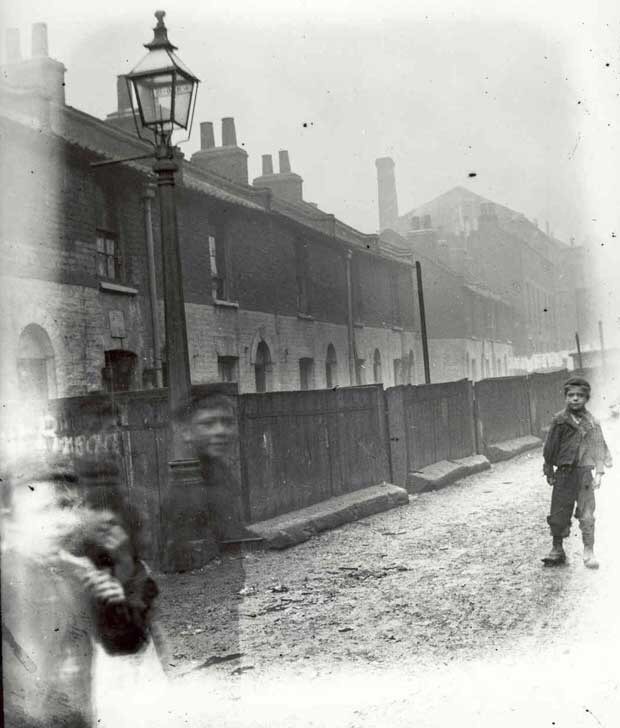 A while ago, on Facebook, I stumbled across this photograph of my old Swedish friend Agnetha Fältskog, taken from the first Abba Greatest Hits album of 1975. If you look closely, you will see that inserted into her hand is a copy of her last solo album, A, released in 2013. Both albums, both images, separated by thirty-eight years, stand, in a way, like chronological bookends of a linear journey. Of her linear journey, along that particular period of her life. In between, of course, much has changed. For better, or for worse. Such is life.

I like to think that the photoshopping artist, whoever he or she may be, has, like I, a penchant for both history and continuity, similarly casting an appreciative eye over the progressive journey, yet, also, being cut to the quick by the unstoppable, winnowing effect of time itself.

There is a song on Agnetha’s…

I thought I’d reblog this after recently talking to someone about the power of storytelling-and the ghost of Annabella.

When I went to Primary School, there used to be a name whispered in the corridors and classrooms that all of the kids knew: Annabella.

Annabella was the name of the ghost of a girl who was said to haunt the girls’ toilets. If I recall the story correctly, it was a girl who was supposed to have hung herself in there. This may be a recurring theme, as when I went to Secondary School there was a story of a boy who had hung himself from the bell tower.

What dark imaginations the young have. The thrill in being scared.

But that latter school story was more vague, the boy-ghost being anonymous. In my junior school the ghost had a name.

My wife went to the same primary school as I. She says that out of the few cubicles in the toilets, there was one whose door was always…

The post that was Freshly Pressed two years ago, gaining me close to a thousand new followers: family, connections, generations and ghosts.

If walls could talk.

If concrete could confess.

If soul could seep through cement.

If only one of those monochrome apparitions could reach out and take me by the hand, leading me into a world of smoke and ale and revelation.

The woman stood by the door on the right of the picture is my great grandmother. The two little girls are my grandfather’s older sisters. The guy on the far left, in the bowler hat, is my great grandfather. The other two younger men could be family, I don’t know. Will probably never know. Posing with a football and a trophy of an unknown triumph, they remain silent, anonymous ghosts. Enigmas of imagination.

The building itself, its very brick and mortar, contains more than can be revealed in a two dimensional image. It contains that which is valued in meaning.

Ancestors of mine dwelt in that place between 1901…

I’ve been sat outside tonight reading ghost stories by the criminally forgotten 19th Century writer Sheridan Le Fanu, drinking coffee and watching both the night and the fog descend: a gradual, conspiratorial settling upon my conceding town.

The muffling atmosphere has put me in mind to watch Jack The Ripper with Michael Caine.

It may only be the first day of November, but winter evenings start here. 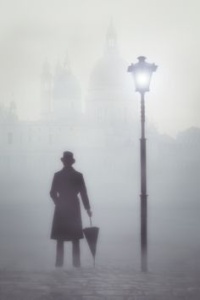 All families have their stories, and these are three of ours. Happy Halloween.

Two components of Halloween/Samhain celebrations, from both a pagan and a non-pagan perspective, are ancestors, and ghosts. So I thought I would combine the two in this post with three stories from my own family, two of them passed down, one of them recounted to me personally.

For any serious paranormal investigators out there, you can file them under the headings of Death Bed Visitation, Ghost Sighting, and Near Death Experience respectively. I am not claiming them to be true, supernatural experiences beyond all rational explanation, but neither am I dismissing them as anecdotal events that are grounded in purely biological and physical laws as we know them. I’m just passing them onto you as I received them. Make up your own mind on the cause. And the effect.

My Gran had a sister named Margaret who, being eleven years old, was three years younger than my…

I have been reading Empire Falls by Richard Russo, the only Pulitzer Prize Winner that I’ve read apart from To Kill A Mockingbird.

Perhaps because we are almost on the threshold of Halloween, a certain passage caught my eye that referred to ghosts, but not to ghosts of the living, more the wraith-like relationship between a mother and daughter, as observed by a peripheral, recurring character named Grace:

Grace was glad not to have to share her thoughts about one of the sadder human relationships she’d ever encountered. It was as if mother and daughter had somehow managed to disappoint each other so thoroughly that neither one was at all vested in the other anymore. They were like ghosts, each inhabiting different dimensions of the same physical space, so different that Grace half expected to see one pass through the other when their paths crossed.

What a home this passage suggests. What a mausoleum.

In a diary that chronicled events and personages connected with the days of the year, I spotted that today was linked with the Christian saint Osyth, who was a minor Saxon Princess who died around the year 700.

She married a sub-King of East Anglia, (who seemed unworthy of being named, at least in the account that I was reading), and founded a nunnery at what is now St. Osyth (funnily enough) in Essex. According to an unreliable biography she was killed by robbers, but if you are of the type who needs substantiated facts, I’m afraid that the famous-as-well-as-venerable Bede does not give her a mention.

Osyth’s nunnery died out, but was re-founded as an Augustine monastery, containing her shrine, in the early 12th century.

I love the old legends that permeate these islands, especially those that concern (perhaps) historical figures partly obscured by the myths and mists of time.

There are various fantastical events surrounding St. Osyth, and some of them are just perfect for this time of year, as the nights draw in and Halloween approaches:

**when she was young she drowned in a stream, but revived after nuns from a local convent prayed for her for three days. (If this was a time-travel story, they would be from the nunnery that Osyth founded in the future. Did Osyth found the nunnery in gratitude to those nuns who resurrected her as a child? Or did the nuns travel back to save the child in gratitude to the adult who established their nunnery? Then again, if she died as a child she wouldn’t have created their nunnery. I’m confusing myself, let’s leave science fiction out of it.)

**she was executed by beheading; where she fell a spring issued forth from the ground. She picked up her severed head and walked to the door of the nunnery where she knocked three times before collapsing. (Knock knock knock. “Who’s there?” “Osyth.” “Osyth who?” “Oh syth down, I’m dead anyway.”)

**her ghost walks along the priory walls, carrying her head, one night each year. (I would guess that would be tonight, then? Anyone up for a vigil?)

The place name of St.Osyth rang some bells for me, so I looked it up.

The village was a focus for witch persecutions in the 16th and 17th centuries, ten local women being hanged. In 1921 the skeletons of two women were unearthed in a garden, one of them claimed to be the first of the women that was tried for witchcraft. I hadn’t heard this story before.

Then I found the source of my familiarity:

In 2012 there were reports of a lion being sighted near the village. After twenty four hours, an armed search was called off.

Is it safe to come out yet? 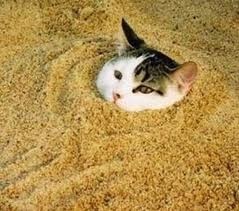 Part of its beach being used for nudist bathing doesn’t come into it.

Must go now, someone has just knocked on my door three times. I’ve looked through the spy hole but cannot see anybody there. At least no-one at head height.