I make no bones about it. The only reason I was reading Before You Sleep was because it was free on Amazon. I’d never heard of the author, Adam L.G Nevill, but I saw this three-story collection promoted as a taster for his anthology of horror/supernatural short fiction and thought I’d give it a go.

I’m glad I did. The two latter stories were okay, but the first, Where Angels Come In, was superb. A tale of two children who brave to enter a reputedly haunted house that stands on a hill in a town where children and pets disappear. A place ‘where angels come in’.

Creepy and grotesque, it was my kind of thing.

I sat outside with a coffee and read all three stories, undisturbed in the late, afternoon sunshine of a mild October day. October: I’m reminded that this is the time for ghost stories; ancestor stories. A time when I often reach for my favourite Sheridan Le Fanu tales, or perhaps that latest supernatural anthology.

A local priest, a couple of years ago, put on a ‘Party of Light’ to counter the many Halloween parties that were taking place. She reasoned that this was to teach the children that no, it wasn’t okay to be frightened. It was not acceptable to be confronted at every turn by ghouls and zombies and goodness knows that else (and this was before the current clown craze).

Some kids like the thrill of it all. I was a child that loved to be scared. Well, I take that back. How I should put it is that I loved scary things, for I was never truly scared by them. I grew up watching Hammer films, reading James Herbert novels (despite my teacher’s reservations voiced during a parent’s evening discussion with my mother). I don’t think it had any adverse affect on me. (Of course my wife vehemently disagrees.)

Instead it fuelled my imagination, made me think that there was more to the world that we knew of,  furthered my love of books.

Helped me to write.

It is difficult when it comes to my own children. I accept that not all kids are like I was, (warped, my wife chips in again), though I did find others of similar interests that gravitated towards me in school. I am unsure about how to monitor my children’s reading material.

I read recently that Stephen King, who read the same kind of stuff as I did when he was a kid, refused to censor his own children’s tastes.

I haven’t given much thought to this. Should I ensure they stick to the children’s section of the library, unlike I did? But, then again, is there anything more darker than the likes of Grimm’s fairy tales? Is horror sanitised early on by the television images of Tom chasing Jerry while clutching a cleaver? Pre-dating the “Here’s Johnny!” sequence of The Shining.

I don’t know. I’ll leave these questions for another day.

In the meanwhile-it’s October. I’m reaching for In A Glass Darkly, seeking out the beautiful but mysterious Carmilla, and perhaps that freaky, red-eyed monkey in Green Tea.

Stocking up on old favourites for when the weather begins to turn. 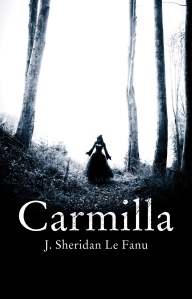 I’m not exactly sure why, but Christmas, particularly Christmas Eve, seems to be equated with ghost stories, even more so than Halloween. Perhaps it’s down to that Dickens fella.

If ever I turn to such fayre, I prefer the older, Gothic-type tales, my favourite, so far, being The Phantom Coach, by Amelia B. Edwards, set on a wild, wintry, northern moor.

Recently, on a coach journey of my own, albeit a motorised version, I finished the book that I was reading, and searched my Kindle for something else to read. I found three books that I had uploaded last year, and hadn’t gotten around to reading yet, by Sheridan Le Fanu. Le Fanu was a great 19th Century Gothic writer, and really should be as well known as the likes of Poe and M R James, who himself was a champion of this author, and I decided to delve once more into his world.

I began In A Glass Darkly, a collection of five stories of varying length (in effect, a mix of short stories and novellas). They are all linked by being case studies of a certain Dr Martin Hesselius, who investigates medical cases with a twist of the supernatural about them. A stormy, winter evening would have been a more preferable time to immerse myself in these, rather than a sun-kissed August afternoon, but still, needs must.

My favourite stories in this are Green Tea, a tale of a clergyman who is haunted by a freaky, red-eyed black monkey, whose plaguing of the poor man becomes progressively more disturbing, and also the wonderful Carmilla, the vampire story that was written before, and was an influence on, Bram Stoker’s Dracula. This has long been a favourite of mine.

The role of Carmilla was played by Ingrid Pitt in the film adaptation The Vampire Lovers. Just thought I’d throw a little Hammer connection in there for you! 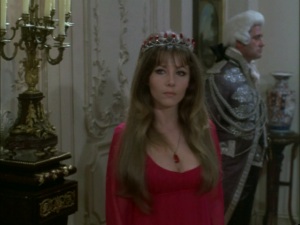 Immediately on finishing this collection, I ordered an anthology of shorter ghost stories by Le Fanu, selected by James himself, for the princely sum of one pence!! One pence-I don’t even mind if I hate it at that price. Maybe I will wait until late December to read it. That will please the wife when she starts planning for Christmas.

One of the other three stories in this collection is called The Room In The Dragon Volant. One of the characters in it made this speech:

“Just so! You English, wherever you are, always look out for your English boors, your beer and ‘bifstek’; and when you come here, instead of trying to learn something of the people you visit, and pretend to study, you are guzzling, and swearing, and smoking with one another, and no wiser or more polished at the end of your travels than if you had been all the time carousing in a booth at Greenwich.”

Over a hundred years later, and it seems that we English haven’t changed that much.