Our castle walls have been breached. Our fortress has fallen.

An insidious vomiting bug has somehow broken through our pitiful defences and is stealthily picking us off, one by one, much in the manner of Christie’s And Then There Were None.

This is why I haven’t posted for a week or so. As I rally the troops, armed with bowls and buckets, I have sent a despatch to City Jackdaw to inform you all that normal service will be resumed once the battle is won.

In the meanwhile, on the positive side, I think that this is the ideal time to begin that New Year diet I had in mind.

Last week I attended the funeral of my great aunt. She was a lovely woman who squeezed every last bit of fun out of life. For a woman in her eighties she was very switched on-she had an iPad, an iPhone 5, and was even on my Facebook friends list.

She was the last of my grandparents’ generation, on both sides. With her passing, it feels like we have lost so much more than just a beloved member of the family. We have lost the last connection to the causes of which we are the effects. A link to the parts that make up our sum.

Now we move onto the next generational  level. That is the natural order of things. That is how we go on.

When she received the news that she had cancer, she decided against having combative treatment, citing her age and her health. She told me that she didn’t want anybody’s pity, and that she had had a good life. My immediate thought was that there is not a lot of people who, having been an orphan at a very young age, and being widowed twice, would look back and say that they had had a good life.

On the day of her death, she told her grown up granddaughter that she would be happy to go tonight, that the time was right.  I hope when it is my time, I can stare my own mortality square in the face with similar levels of acceptance, of reasoning, of faith.

There were no recriminations, no regrets.

Hers was a peaceful, natural end to a life filled with laughter. That makes things easier.

When we are with others, we sit in the blazing light of their presence, filled as they are with personality and vitality. And life. When their essence leaves us, we are suddenly confronted by the shadow of their absence.

If we are attentive, we can follow still the wake of their journey, track the fading trails of light as they sink over the horizon.

We can close our eyes, and feel still the warmth on our face. 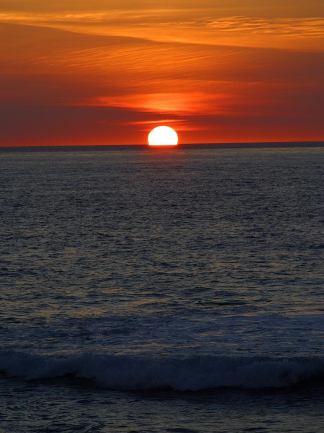