My daughter Courtney surprised me on Father’s Day with tickets to see Kula Shaker in Manchester, at a venue I’ve seen them before. And, as lead singer Crispian Mills pointed out on the night, this time round it was quite an appropriate venue.

Their latest album release (a double album) is a bit of a concept album. Titled 1st Congregational Church Of Love And Free Hugs, Mills explains:

“It is set against a theatrical backdrop, a small church in a semi—fictitious English village called Little Sodbury. I just liked the mental imagery of the small church with a rickety, leaky roof and a great storm raging in heaven, with all these tiny people huddled together to tell stories and sing songs and make it through the dark night.”

The concert took place in the Albert Hall, which was built as a Methodist Hall in 1908.

There are also connections with Manchester for the group: Mills told the audience that Manchester was a special place for them, we Northerners accepting the group when the ‘villains’ of London said “no.” It was after a gig in this city that they were signed by a record company.

The band made a nod to Manchester’s musical heritage during their performance of their popular song Tattva, breaking into the native Happy Monday’s Hallelujah.

My daughter, familiarising herself with their better known hits during the preceding days, asked me how old they were. On telling her that I didn’t know the age of every member of the group but I did know that the lead singer was born in ‘73 (with me checking in in ‘71) I think she was expecting four frail old men to take the stage.

But they blew her away. With Mills as energetic as ever and the other three in sync, they were only halfway through the opening number when she remarked to me “They’re great live!” Which came as a relief to a veteran like me.

And when Mills threw his guitar into the air, catching it on the spin before throwing himself down, horizontal, onto the wooden boards without missing a note, she exclaimed “My God!”

Not for the first time that that phrase would have been uttered in these surroundings. But what was definitely a first for Courtney, who already has a number of concerts under her belt, came during the encore: singing along to a song entirely in Sanskrit! (Govinda)

Coincidence. Serendipity. I’ve been speaking a lot about that kind of thing recently. From a reader posting comments on City Jackdaw about places from her childhood that also hold connections for me, to a fellow blogger describing serendipity playing out in her own life.

Along with what’s the chances of that happening in the face-to-face world that we operate in, too.

Highlighting them seems to be attracting more of the same, eavesdropping universe that this is.

This post is an example of a string of coincidences that recently played out over the last few days.

It began when I messaged my cousin to see if he wanted to go to a local Non-League football game. He replied that, along with his family, he’d gone to Glastonbury for a few days, a place I know that they love.

In answering his text I told him to “Enjoy Avalon”, referring to the link that the place has to Arthurian legend.

Later that day, while absently scrolling through Facebook, a video surfaced that was first posted in January by the group Kula Shaker. It featured them spending some time on top of Glastonbury Tor, at either sun-up or sundown, with some music and chanting featuring in the background.

So of course I sent this video on to my cousin as I was sure he’d appreciate it. He did.

Then, speaking of Avalon, in a local charity shop I came across a book that I’d been meaning to read since I was a child:

I snapped up a bargain and was able to start it, a few decades down the line from those first youthful intentions.

Now, back to Kula Shaker again:

They are a band that seem to be marmite to people, but I like them. I first encountered them in 1996 when I worked for a short time in a warehouse (predictive text changed that to whorehouse 🙈) on Stakehill Industrial Site.

Driving an electric pallet truck, I passed the radio, perched on a bottom stair, that was playing what sounded like a slice of 60’s psychedelia, which I love.

After first catching my ear, it seemed that, as I made many circuits around the warehouse throughout the next few days, whenever I passed the radio that same song would be coming from it (coincidence again?). This regular amount of airplay demonstrated that whatever it was, it must be new music, and eventually I stopped my truck and hung around long enough to get the name of the track:

I went straight out and bought their debut album ‘K’ which featured that song, and have been a fan ever since.

Now, fast-forward back to today.

Kula Shaker’s last album had come out in 2016 (K 2.0) but they had been posting/tweeting/crowing for a few weeks about some new music and a tour that was imminent.

Then we got a countdown promising . . . something.

First there was a cryptic smiley drum thing.

Then the countdown became more specific.

And then D-Day, a video was posted showcasing the first music from this pending new album. The title of the song?

Glastonbury/Avalon/The Once And Future King

Don’t be surprised if the group play Glastonbury this year. This thing is going to run and run.

My morning observations so far:

magpie takes it out on any living thing in sight.

This lovely weather allows me to sit outside and watch all of this, but nobody takes it in better than my dog, Bryn, who stands on his rear haunches like one of those meerkats that grabs his attention on the tv. I think this position adds to his delusion that he can somehow reach them, that they are just extra toys with which he can play.

Watching all of these corvid shenanigans has put me in mind of 33 Crows by Kula Shaker. I was a fan of them in all their 90’s psychedelic pomp, but this is a more stripped back track, though, from their 2016 album K2.0.

You can skip the ad, if you want to, of course. Now I’m off to placate Bryn.

Ritz is, for me, fast becoming a by-word for nostalgia. An old nightclub in Manchester, it now serves as a concert venue. Last year, I went there to see Sheryl Crow, nineteen years after I first saw her perform. (At the risk of name dropping, again, there is a link to our conversation at the end of this post.) 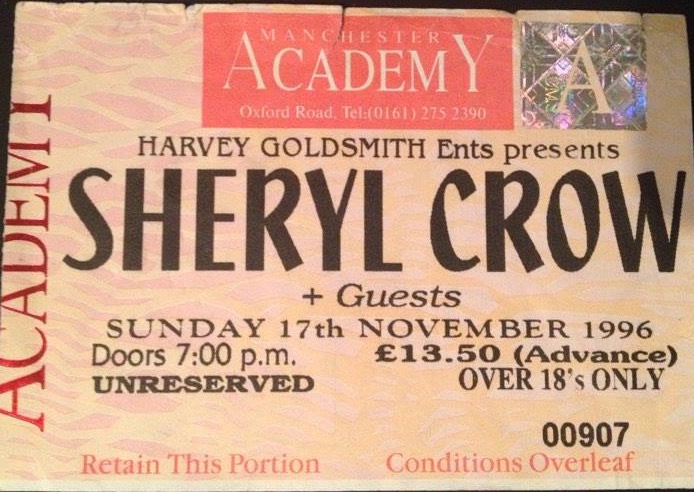 On the 16th of February, I returned to that very same club again to see Kula Shaker, seventeen years after I first attended one of their gigs. Perhaps it is the lot of artists of a certain vintage to end up in this old spit and sawdust place, but anyhow, I was there to welcome this four piece back to my city. 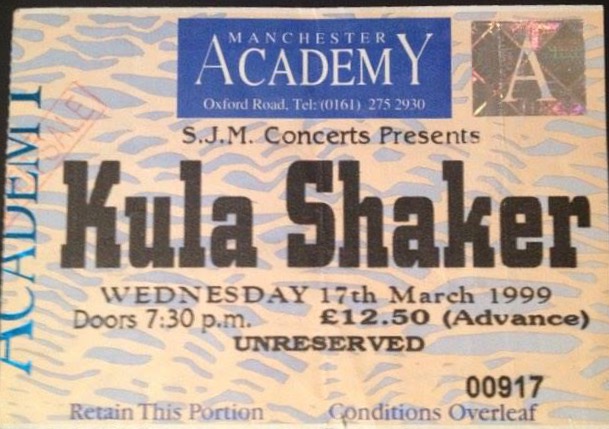 I first heard Kula Shaker back in the days when I worked, briefly, in a twilight-lit, splinter inflicting warehouse in the mid-nineties. Recklessly driving an order-picking truck down the narrow aisles, a couple of times I heard a particular song being played when I passed by the small radio plugged into a socket outside the office. A little psychedelic, a little out of era, it sounded different. Liking it, I made it my business to discover what it was. Soon I found out that the song was called Tattva, and was by a new band called Kula Shaker. The song was different, Kula Shaker were different.

Eschewing the lad culture of the time, they were a hybrid of sixties/seventies western rock sprinkled with a dose of Indian musical instruments and mysticism-inspired lyrics. They split for a while after a couple of albums and then got back together again.

And now, twenty years after hearing that first record, I was in Manchester with reunion on my mind.

The first port of call was an old, traditional pub situated near The Ritz called The Salisbury. While in there with a friend,  I noticed someone stood near the bar holding a Kula Shaker ticket while trying to catch the barman’s eye, and I pointed out that the guy was going to the same concert as we were. A little later, I spotted another man sporting a ticket, and deduced that we were holed up in the ticket touts’ main business establishment.

After a couple of drinks I nipped to the gents, and, whilst doing what a man has to do, read a poster that was positioned directly in front of the urinal. It was proclaiming a pre-gig offer: show your concert ticket and you get a discount on every drink you buy.

We went to the club, and my friend and I met up with a couple of other mates. All four of us had attended that pre-millennium gig, and were all imbued with a similar sense of nostalgia. The Ritz began to fill up. The tallest person you ever laid eyes outside of Middle-Earth decided to stand directly in front of me. Slender, pushing seven foot tall, he had long arms that hung down around his shins. When the music of the support band started up his arms were like a windmill in a hurricane. He could have had an eye out.

Incense burning at the end of the stage, Kula Shaker next emerged to rapturous applause. One of our gang commented on how well the lead vocalist (Crispian Mills) had aged, but the singer did warn us that he wouldn’t be able to jump around as much as he’d like to as he was carrying a fractured rib. But on the more rockier numbers, like Hey Dude and Hush, you wouldn’t have guessed it.  He even climbed up on a speaker at one point to jump back down again, all lit by a suitable psychedelic backdrop.

In introducing Peter Pan RIP, Mills said that the song was written in two different places: it was begun in Regents Park, London, and finished in Belgium, and so was a little schizophrenic. In the act of creating, I can relate to that.

He described 303 as a love song to a road. Okay, that would be a first.

As the concert went on, I couldn’t help but think how things have changed, as I looked out over a sea of mobile phones capturing the performance. There were none of these in evidence seventeen years ago.

As the concert came to a close, though, I reflected on how some things were still the same.

For those of you unfamiliar with the group, here is their 1996 song Govinda, the first (and I think only) single to appear in the UK charts sung totally in Sanskrit. The group finished, this night and all those years ago, with this song.

As we poured out onto the cold, Manchester streets, people could be heard humming and singing the lyrics to Govinda. Perhaps hearing people singing these Sanskrit words on the streets of Manchester was not that unusual, though. I once went to a Clapton concert, and he closed with Somewhere Over The Rainbow. Afterwards I can honestly say that it was the first time I’d been in the men’s toilet where men were lined up humming that very tune.

I am still firmly anchored in the town of my childhood,which is in Manchester, UK, causing me always to be plagued by ghosts. I have a wife who keeps me grounded, and four children who keep me young. I love reading, writing, but not arithmetic.
Join 7,625 other followers