On the way to Manchester, in Collyhurst, there is a war memorial that lists the names of local men who died in the First World War.

Among that obscenely long list of names are two which have a personal and emotional connection to myself-two of my great grandfathers.

One is my mum’s grandfather-Albert Cartwright.

Here he is pictured with his wife Ada as he is about to leave for war. Tall and proud in his Lancashire Fusiliers uniform.

I cannot help but contrast the image of Ada here, bidding farewell to her husband with all the fears and uncertainties that that must have involved, with the strong, confident, formidable woman she appears as on another photograph I have of her. (On the right).

Albert did return home, but died the day before new year’s eve in 1919, as a result of being gassed when at the front.

The other name is my Dad’s grandfather: Timothy O’Sullivan.

He died on 10th January 1917 and is buried in Thessaloniki, Greece. A local orphan who was destined to lie in foreign soil.

In those days, family members had neither the means nor the opportunity to visit the graves of their loved ones who died overseas. A family notice, placed in the local newspaper by his older half-sister, spoke of ‘the pain of an unknown grave.’

On the 90th anniversary of Timothy’s death, I stood at that grave. Conscious that his widow and children never made it there, I felt the ghosts of my gran and my great aunt looking over my shoulder. Two women who often spoke of the man they never knew. I felt I represented them, along with my Dad, and my children. All the descendants of the chain.

Every year on Remembrance Sunday, I take part in the service at that memorial, conscious of the links and the sacrifice and the blood that runs in my veins.

I let my daughters place a cross that holds the names of their two ancestors, along with the name of my wife’s great uncle who was worked to death as a prisoner of the Japanese, building the notorious Burma-Siam railway in World War Two. 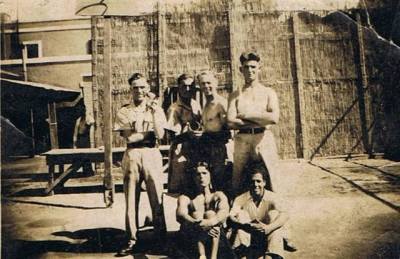 My wife’s great uncle is the tall, strapping guy stood on the right. Fred Dyson, he died 15th Nov 1943. A generation on, a different war, the same sense of loss.

I have posted all of these photographs here to serve as a further memorial.

Every Remembrance Sunday, as well as the men who are represented by those cold, carved letters in stone, my thoughts turn also to my two grandmothers who are no longer here. Two women who I was close to, two women who as children both grew up without their fathers because of war.

That is reason alone for me, and my children, to remember.