City Jackdaw was a weekly penny magazine that ran in my home city of Manchester from 1875 until 1880. I came across a reference to it at a time when I was searching for a name for my blog. I am a sucker for history and connections, so it seemed quite apt.

I also liked the idea that it was something that some of my Mancunian ancestors may well have read. 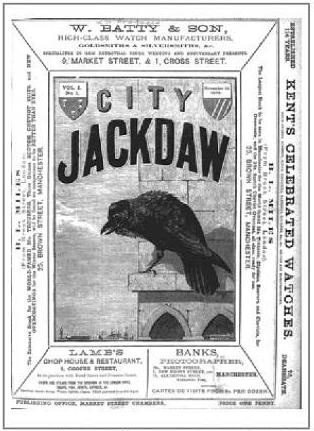 I found the following description of it:

‘The subject matter was broad and current. Poetry, articles, sections on the theatre and “Claws of the Week” were regular features.’

That seemed quite relevant. When I started my blog, I incorporated into it a series of posts that occasionally feature on Fridays, called ‘Claws For The Weekend’.

It was also described as ‘a humorous and satirical journal.’

One day I may get myself a copy of the 19th Century City Jackdaw, or check one out in the archives of Manchester Central Library. I think that would be kinda cool.