As it was Oscar night last night, I thought I’d post these photographs of my favourite actress’ two Oscar wins: Vivien Leigh in 1940 for Gone With The Wind and in 1952 for A Streetcar Named Desire. 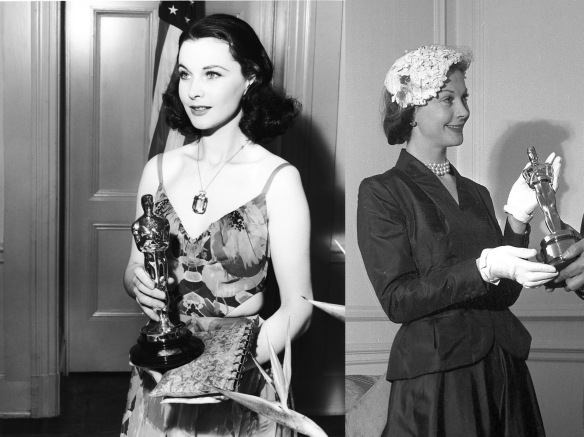 I was going to stay up and watch the awards live (last night’s I mean, not Vivien’s, as it’s kinda hard if you’re not yet born), but the flesh was weak and I recorded it instead to watch later.

But as always it’s difficult to avoid spoilers. I was pleased that Gary Oldman won Best Actor for Darkest Hour and Frances McDormand won Best Actress for Three Billboards Outside Ebbing, Missouri. I saw both of these films and predicted both stars for the honours after enjoying both movies. I got Best Film wrong though, tipping Three Billboards which was my favourite. But two out of three ain’t bad.

Well, the Oscars are almost upon us. You know what? Current controversy aside, I have never watched a single Academy Awards presentation. Not a full show, live, anyhow. I may have caught the highlights the odd year.

Do any of you guys watch it? Maybe it’s because I like old movies, but, to me, the Hollywood of the past seemed much more glamorous.