I’ve always been a Stephen King fan. I grew up reading him. I love his depictions of small town American life, as well as his more epic stories. Though I also read his thrillers, it is the horror books of old that I have a penchant for.

My two favourites are Salem’s Lot, and It. King’s stories don’t always translate well to the big (or the small) screen. In regard to Salem’s Lot, I do like the original television adaptation, starring Hutch himself-David Soul. Though perhaps more faithful to the book, I’m not so enamoured with the remake.

As for It, I last watched this years ago. I don’t recall much about it except that I was disappointed. Well, now a new, two-part movie is being made. The first movie is about the children, The Loser’s Club, who come together to fight the evil presence that resides in Derry. The second film will depict the next confrontation, when the children are now adults.

I’m looking forward to seeing a fresh perspective of King’s great novel. Today, I saw the first glimpse of the new, evil Pennywise. I shared it today on Facebook, tagging in the picture two of my friends ostensibly because they are King fans, but also because they are afraid of clowns.

This afternoon, for the first time ever, I saw Ronald McDonald in our local McDonald’s restaurant.

Kids were traumatised. He seemed totally oblivious to the wide circle that was forming as he moved among the queues. “Freaky!” was just one of the comments I heard muttered.

Is he really a suitable figure to promote Happy Meals? Why don’t they go the whole hog and use Pennywise to bring the families in? Balloon, little boy? 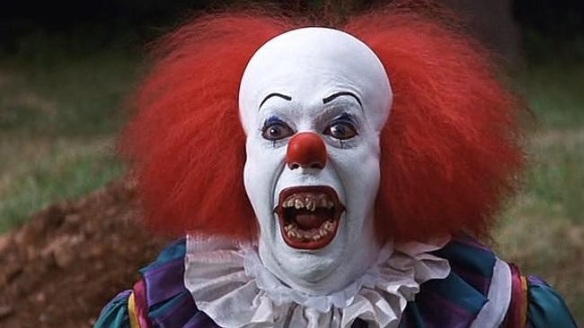 At long last I would be able to have a coffee in there in peace.

Whenever I think of clowns it is either Stephen King’s creation or John Wayne Gacy who springs to mind.

Think it’s time for the kids to give Subway a go.

I am still firmly anchored in the town of my childhood,which is in Manchester, UK, causing me always to be plagued by ghosts. I have a wife who keeps me grounded, and four children who keep me young. I love reading, writing, but not arithmetic.
Join 7,629 other followers