Great poem I read this afternoon, about the changes taking place, and the damage being done, to this area on our watch.

Last week, here in Manchester, doctors warned people with asthma and lung illnesses not to exercise outdoors. Everyone with heart conditions were advised to reduce all outside activity.

The reason for this? A thick cloud of Saharan dust and smog had descended in stealth upon the city. Under this unchecked advance, air pollution level had rocketed to Level 10 on the governments Daily Air Quality Index, officially the highest point on the scale, as the African desert sand swooped in like a biblical plague.

It was worse in the town centres. Where I live, although hardly rural, any change was barely discernible. Things just appeared a little hazy. 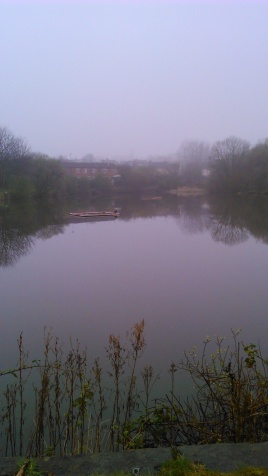 Perhaps those well-meaning doctors were a little premature. You see, us Mancunians have experienced much worse. Manchester, after all, was once branded the Chimney of the World due to its polluted air.

John Ruskin said that Manchester was the spiritual home of pollution, calling its smog Manchester Devil’s darkness. I think the council must have dropped that particular epithet from its tourist website.

In 1931 a thick smog cloud killed 450 people. So a few grains of African sand won’t bring the city to its knees. Not this side of Apocalypse.

Anyway, things have cleared now. The all clear sirens have sounded, and our parks are once again full of athletes clutching their stopwatches and inhalers.

I can now step out with confidence and safely take in great lungfuls of our own locally produced fumes.