When my Dad died in 2003, I found in his wallet a cutting from my primary school magazine. It was of a few lines that I had written way back in 1980, when I was eight years old.

I had no idea he had kept it.

Of course I don’t remember writing it. It made me wish I had kept all my old books and jottings I made all those years ago.

In that same school I won a Halloween story-writing competition, where we had to write a story and present it in a self-designed cardboard cover jacket. I do wish I still had that one.

All I can remember about it now is that it was a werewolf story, based in an English country village setting, somewhere out in the sticks, and as usual, I had left it until the night before it was due in to write it. I rushed ahead with it until I approached the end where the werewolf would be shot and its identity revealed. I hadn’t yet decided who it was going to be, (for in effect I was making it up as I went along), and I had a great idea.

The hero of the story, an outsider who was a new resident of the village, had been given a gun and the required silver bullets, by one of the old locals. What if that very local guy was the werewolf-wanting to end his own shape-shifting torment in a suicide-by-cop scenario? That would be a great reveal.

I flicked back through the preceding pages, and damn! The man had been present when the werewolf had crashed through a cottage window in an earlier scene. I had no time to rewrite it. (I still haven’t learned that lesson.) I had to finish on the ineffectual revelation that the lycanthrope was some bloke that worked in the village pub. How lame is that?

The story, coloured-in cardboard cover and all, is long gone, along with every other juvenile tale that I used to while away the hours creating, lost to time and numerous bedroom clear outs.

After that school magazine-published dwarf description, the earliest example of any surviving creative endeavour of mine is a poem that I wrote about a vampire (werewolves and vampires-that’s the kind of kid I was), when I was fifteen years old.

I include it here for posterity. Please go easy on me, you harsh critics, for I was but a wee, pimple-faced bairn, scribbling away in my den as I listened to the Top Forty.

In the distance, the city takes respite on the cusp of dusk. Her song falls short of earshot. 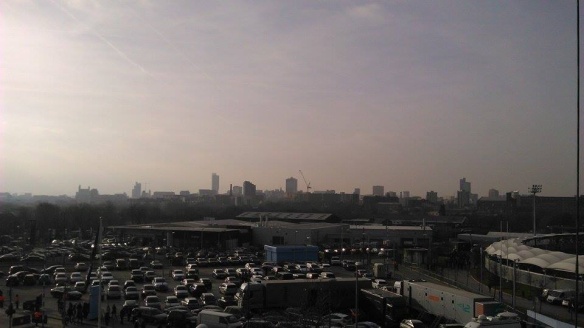 In the distance, the two churches stand tall in the cold, winter sky. Here, another faith plays out. Faith with a silent expectancy:that spring will return with her colourful flourish. There is a certitude of faith in the order of things. To this we pledge our souls. 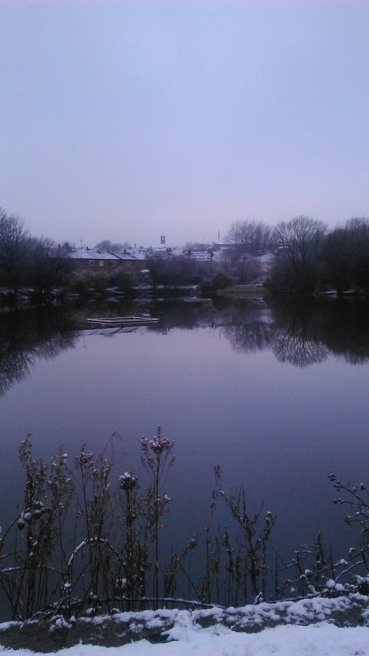 All of my heroes are creative people.

I had some great role models as a kid, and I’m a football fan, but it is the poets, the writers, the songwriters, that I have always admired.

I have never particularly been a fan of Marilyn Monroe the sex symbol/Hollywood actress, and know next to nothing of her life story. But, on discovering that there are books containing her own writings, as opposed to merely other people’s biographies of her, my interest and curiosity was piqued, in a similar fashion which led to my recent post about Ingrid Pitt.

The first book that I read is called Fragments, and contains poems, letters, and yes, fragments of jottings, made on hotel letterheads, in notebooks, etc, shown here in her own handwriting. Flicking through the pages you get a sense of uncensored intimacy. There is a letter included which details some of the things that happened to her when she was confined to a psychiatric hospital until Joe DiMaggio’s intercession. 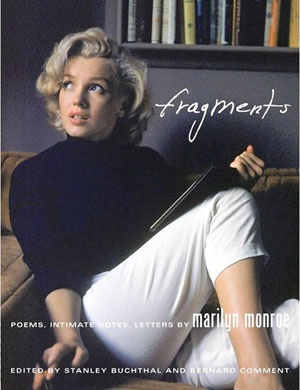 I particularly liked her unrefined, undeveloped poetry and prose.

I am both of your directions

but strong as a cobweb in the

But my beaded rays have the colours I’ve

seen in a painting-ah life they

In a footnote, it is revealed that Marilyn wrote several variations on the theme of the twofold course of life, and gives an example that can be found in Norman Rosten’s book:

To The Weeping Willow

I stood beneath your limbs

And you flowered and finally

and when the wind struck with the earth

and sand-you clung to me.

Thinner than a cobweb I,

but it did attach itself

and held fast in strong winds

life-of which at singular times

I am both of your directions-

somehow I remain hanging downward the most,

as both of your directions pull me.

We all come to her writing with our own prejudices and ideas, and of course it is hard not to read it outside of the context of what we know about her life’s end, (conspiracy theories not withstanding), which imbues some of the lines with a melancholy.

Oh damn I wish that I were

There is always bridges-the Brooklyn

But I love that bridge (everything is beautiful from there

and the air is so clean) walking it seems

peaceful even with all those

cars going underneath. So

it would have to be some other bridge

an ugly one with no view-except

thing about them and besides I’ve

The second book is her autobiography, the manuscript being published over a decade after her death. 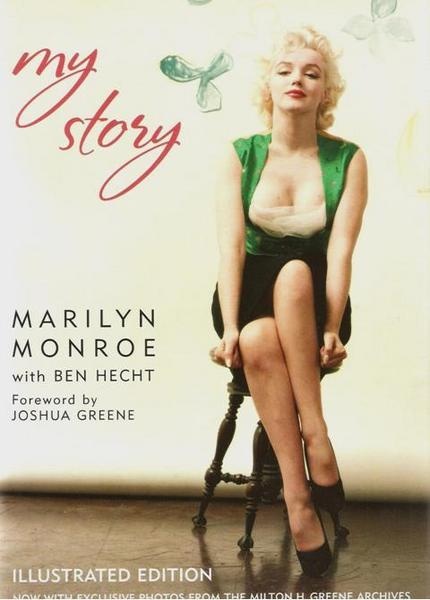 In it she throws light on her early, troubled life as Norma Jean, a girl from an orphanage, plagued by fears of hereditary mental illness, and devoid of friendship and any real sense of belonging. She tells of the time she was molested by a ‘respected’ adult, and nobody would listen to her. She went from one foster home to another. Then, as she got older, her body began to develop and, suddenly, for the first time in her life, people began to notice her, particularly the boys in her school. She got her first real boyfriend, a twenty-one year old who believed her to be eighteen rather than the thirteen year old that she actually was. She fooled him by ‘keeping my mouth shut and walking a little fancy.’

When he informed her that they were going to the beach, swimming, and having no costume of her own, she rushed to borrow one from her ‘sister’ who was smaller than she was.

It was there, in her ill-fitting bathing suit, that she discovered even more that the unwanted child who nobody minded was now garnering the attention of others, both men and women.

I paid no attention to the whistles and whoops. In fact, I didn’t hear them. I was full of a strange feeling, as if I were two people. One of them was Norma Jean from the orphanage who belonged to nobody. The other was someone whose name I didn’t know. But I knew where she belonged. She belonged to the ocean and the sky and the whole world.

In the part where she rejects the advances of the head of a studio, rather than sleep her way to her big break, there follows the poignant:

I drove to my room in my car. Yes, there was something special about me, and I knew what it was. I was the kind of girl they found dead in a hall bedroom with an empty bottle of sleeping pills in her hand.

The book goes on to tell how Marilyn went from a bit part player to the hottest thing in Hollywood, the manuscript ending when she marries Joe DiMaggio and goes to entertain the troops in Korea. It is a pity the story ends there, as I would have loved to read her personal account of the rest of her life, but, alas, we will have to turn to the writings of others for that. I loved My Story, and will now read a biography of her life (I have in mind the Donald Spoto one), but it is to these two books that I will undoubtedly return. She comes across as a complex character, in equal parts intelligent, erudite, charming, witty, fragile, and vulnerable. There was much more to her than the Hollywood image that she was portrayed as. She was many things, but she was definitely not some dumb blonde.

I couldn’t have put it more beautifully myself.

Pripyat is a Ukranian city located less than two miles from the Chernobyl Nuclear Power Plant, abandoned for the last thirty years by its then 49,000 inhabitants. In June, cinematographer Danny Cooke visited the city, using a drone to capture scenes of abandoned parks and buildings, and entered on foot schools and homes to film the detritus of humanity.

This is a three minute compilation of the footage he captured, set effectively to Promise Land by Hannah Miller. In it we see a silent city left to decay in the solitude of man’s absence. The Mary Celeste of cities, slowly being reclaimed by the tainted land.

The location is only recently discovered. An unmarked grave, a place where he has lay since succumbing finally to the gas that ravaged and burned his airways and lungs. Effects that would have thwarted any joyful, loving, homecoming.

New Year’s Eve, 1919. The day that the year would have trembled on the edge of extinction, dragged that wheezing, gasping man with it.

The world moved on to new beginnings.

Today, the ground is just the ground, unremarkable, undisclosed. The air is dank and cold, resonant with stirring echoes that insinuate images and moments that the imagination seizes and runs with.

A broken woman holds a young girl’s hand, their emotions fluid and merging, seeping deep into the soil.

The seasons pass, the earth turns, the girl grows into a woman who now holds the hand of another girl, a chain link of affected generations.

The original woman now shares the space with the man, beneath their feet. Black lace married to khaki for eternity.

This later woman lays flowers on the anonymous spot, watched by the girl who swallows her questions, then they both wander away to visit another, freshly festering, sore.

The girl glances back once as they near the chapel, sees me, distant, taking my turn.

Devoid of crosses, I leave this marker, small and consumed, in this place that has anchored fatherless girls to stare at an empty spot, while daring to contemplate alternative worlds.

I depart this ground with a solemn promise, and the autumn leaves gently circle, dancing to time’s capricious tune. 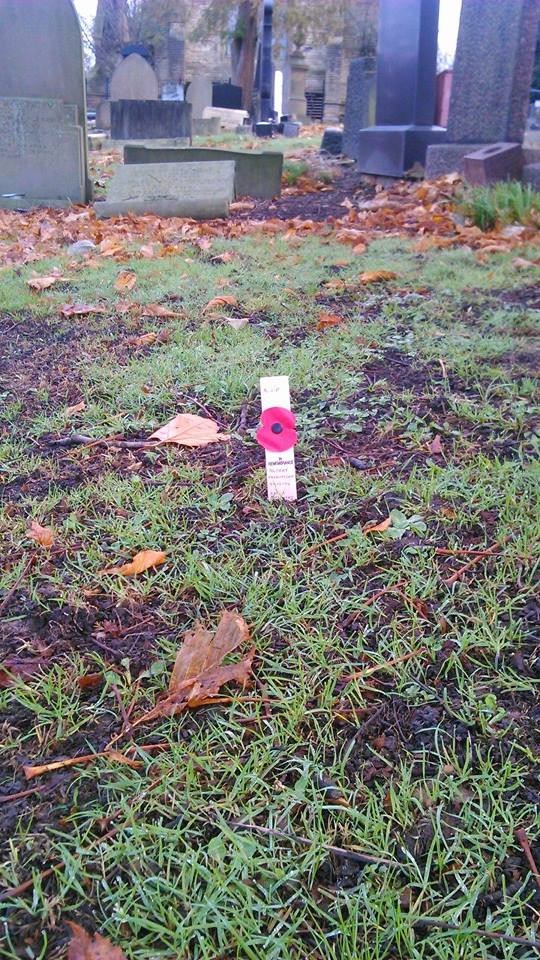