This post has a higher word count than I normally commit myself to, but it is the images that I want to share with you all so please bear with me.

As a lover of history and archaeology, it is all about layers. Layers and eras.

The era that enthralls me the most is the Neolithic era.

The Neolithic really was the time when ‘we’ began to become ‘us’. Our hitherto continuous lifestyle changed to one more recognisable to us today. We left the hunter-gatherer lifestyle behind for a more settled way of life. With cattle and crops we adopted farming as the way to survive. We began to develop a relationship with the land, putting down roots. Burying our dead in monuments and tombs that we could re-visit and interact with, rather than just leaving them behind as we followed the migratory routes of our food sources.

Instead of merely experiencing the landscape, we began to change it.

I have visited many surviving, Neolithic stone sites in this country, from the famous Stonehenge in Wiltshire in the south, up through Castlerigg in Cumbria and Kilmartin in Scotland  to the most northern places in Orkney. They constantly draw me and effortlessly capture my wonderment and imagination.

From the Neolithic period there also survives countless examples of a creative and artistic culture- be it the strange symbols engraved on tombs whose meaning is now lost to us, the artwork painted  on cave walls, or the inscribed drawings on bone and tusk, all paling in comparison to the beautiful and exceptional sculptured figures that have been unearthed.

The reason I visited London was in order to see an exhibition entitled Ice Age Art: Arrival Of The Modern Mind, which was on at The British Museum.

Artifacts from all over the world had been gathered together in this one place and I was determined not to miss this opportunity to see them.  Sculptured models, jewellery and drawings representing people and animals, all on display side by side.

There were many examples of the depictions of animals and creatures that these early people  would have encountered, some familiar to us now, some long gone, like the mammoth.

People more artistic than I were gathered around the exhibits, sketching in notebooks copies of ancient drawings made on ivory and antler.

One such work is this drawing of two deer made on the lower leg bone of a reindeer around 12-14,000 years ago and found in France.

Interesting though these artworks are, it is the carvings that really capture my interest, and I want to share some of my favourite ones here with you.

Here is the head of a Lion, (probably once attached to a full body) made of mammoth ivory, from Vogelherd Cave, South West Germany. It is around 35,000 years old. I wonder what the significance of the crosses are? Many such animal figures feature  markings like these. Do they convey a message that a contemporary observer would have immediately understood?

Here are ‘Swimming Reindeer’ made from mammoth ivory, from Montastruc in France. They are 13,000 years old, putting them at the end of the last ice age. The artist knew the animals that he created, and unlike some pieces that could have been created by anybody at that time with the inclination, this was the work of a gifted, competent individual, confident in his or her craft. As the only female deer that have antlers are reindeer, it makes identification of them certain. And amazingly, due to the female pelt and the fact that males normally lose their antlers after rutting, this depicted scene can be placed in November or December.

Stunning though these animal sculptures are, it is the human figures that particularly fascinate.

The Lion Man, below, made of  mammoth ivory, is from Stadel Cave on the Hohlenstein, Germany.  This is the world’s earliest figurative sculpture, at 40,000 years old. This piece shows that the person who created it, and the people who it was created for, were capable of imagination. This wasn’t a reproduction of a creature that these people were familiar with, such as the previous animal carvings we have seen, or the animals that can be found replicated on cave walls. This was an imagined figure, a lion with human-like characteristics. Did it have shamanic, symbolic purposes? What we can say is that this shows that the mind behind its creation was capable of new concepts, and not just of reproducing  known, familiar forms. 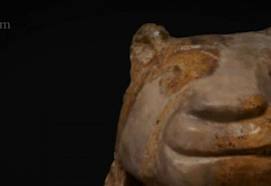 Compare the similarities of the Lion Man’s head with the lion’s head at the beginning of this post.

Below is a male figure with articulated head and arms, made of mammoth ivory, around 26,000 years old. It was found placed on the skeleton of a man in a burial in Brno, Czech Republic. The body was surrounded by bones of mammoths and woolly rhinoceroses. With a vast number of other items discovered in the burial, the man was of obvious exceptional status. It has been suggested that he could have been a shaman. His skeleton showed signs of him having suffered a painful disease of the joints. Did his suffering and disability mark him out as special?

With movable limbs and head, this is a puppet-like sculpture. The head and torso have opposing holes allowing it to be moved with a stick, and seems also to have had movable limbs. Did the movement of this creation represent, or replace, his own limited movement, perhaps in the spirit world?

Perhaps the man buried was the ‘puppeteer’ of this figure, who used  it to enact certain stories or myths. The connection of man and puppet transcended death.

All we can do is speculate. 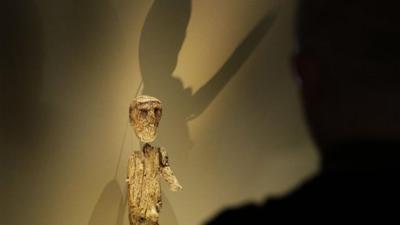 In firelight, the use of shadows against a canvas tent, or cave wall, would have added a dramatic, theatrical sense.

Today we probably find puppet shows a bit tame, but in one of my usual moments of synchronicity I stumbled across this photograph of children at a  puppet theatre in Paris, 1963. Look at the reaction on those kids faces!

The puppet must have had a purpose, and an intended audience.

The Lespugue Venus, below, is the figure of a woman, of mammoth ivory, found at Lespugue Cave in France. Incised lines indicate a long hairstyle falling onto her shoulders. This bowed-headed figure is famous as the work which fascinated Picasso, who owned two replicas of the piece.

How amazing that the work of an unknown, ancient artist can still inspire  artists today 25,000 years down the line.

This rear view seems to show some kind of skirt or apron hanging down from below the hips.

This sculpted portrait head, below, probably broken from the body of a female image, is made again from mammoth ivory and was found in Brassempouy cave in France. At 25,000 years old, it is regarded as one of the greatest ivory masterpieces of all, and one of the earliest realistic representations of  a human face and hairstyle (although the hair has also been interpreted as a wig and a hood.)

It reminds me a little of a personalised chess piece.

Was this based on a real person who lived and breathed our air 25,000 years ago? It gives a limited sense of hairstyle, or headwear, of the time. 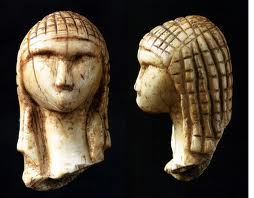 This last figure, below, is my favourite, I was drawn to return and study it once more when I finished viewing the exhibition.

Between 25 and 29,000 years old, this is the world’s oldest known portrait. It was found at  Dolni Vestonice, Czech Republic. (Another figure found at this site was given a tomograph scan in 2004, and found to have the fingerprint of a child upon it, who must have handled it before it was fired. How great is that?)

It is a woman whose face shows a twist to the smile, and the left eye droops. Thinking back to the disability of that  man of Brno, associated with the puppet, could it be that this person was similarly marked out as special due to some type of birth defect or paralysis? Maybe it is the result of an injury in some dangerous encounter?

There has been a skeleton of a woman found in a burial at the site which shows evidence of serious injury to the head and left side of the face, from which she was helped to recover. Of course any connection cannot be proved-but it is intriguing to think that we could have the model and subject together.

I cannot help but look at this face and feel that I am looking at someone who actually lived 29,000 years ago. Just the very nature of the deformity to the face suggests this is not a ‘Goddess’ or archetype representation but a real, blemished, person.

Who were you? How did you live? What were your beliefs? 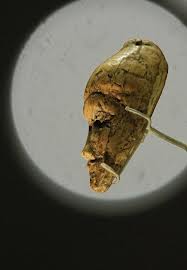 Remains discovered at this site shows other individuals with signs of disabilities, suggesting that the disabled underwent different burial practices to everybody else who were probably exposed to the elements and then scattered. Were they placed back into the womb of the earth and somehow ‘made right’, or given back to Underworld Gods that had made their mark on them by disfigurement? Were they set apart from everybody else, and given special, social status?

There is so much we don’t know. A lot of the artifacts in this exhibition were deliberately broken before being buried or placed in the caves or in the ground. Was this a way of signifying the end of their use to the living, and were broken to be made right in a similar fashion to the disabled? I think of places such as the  Barnhouse settlement that I have visited in Stenness, Orkney. After continual use for 700 years,  it was suddenly abandoned and was deliberately destroyed in the process, seemingly by its inhabitants. Was this a way of designating  it to be no longer of use to the people, and now it served as homes for the ancestors?

Are these carved figures now for the purpose of the dead? Items of importance for an Otherworldly voyage?

I find this period of our history fascinating-there is so much that we don’t know, but there are many hints and tantalising glimpses inviting us to try and make connections and understand the reasoning of our early ancestors, and how they experienced the world around them. Glimpses of expression that has passed down to us like an inspirational thread.

In my enthusiasm and insatiable curiosity, I  thought I would share such glimpses with you. There were many other items in the exhibition that I have neglected to highlight-maybe a future post, yes?