You know, in my head, I’m still a teenager. Early twenties at a push. But last night a little reality leaked in when I spent an hour or so outside, reading The Mockingbird Next Door, by Marja Mills.

There is some controversy about this book. Harper Lee issued a statement saying that she had not participated in the writing of it. But (in effect a rebuttal of the rebuttal), her elder sister, Alice, issued one confirming both their involvement and approval of it. As did a close friend, who was quoted many times in the book. It does seem that Harper’s close circle of friends, for so long famously protective of the author and unwilling to speak about her, were suddenly available and willing to talk, indicating that they had indeed been given permission by the Lee sisters.

Maybe the source of this new openness to engage was an anxiety about two movies being made at the time about Truman Capote, spotlighting Lee’s role in the research done for his book In Cold Blood, in addition to a new, unauthorised biography of Lee due to be published.

I loved the book, throwing as it did new light on a favourite author, and also a disappearing window of the world.

In my head, I’m still a teenager, and all that . . . but while reading, I occasionally came inside to get a coffee, answer the call of nature, etc, and in doing so I would catch a glimpse of my reflection in the kitchen window. Wearing a particular blue jumper, and my reading glasses, I saw in that reflection both my father, and my grandfather. I could imagine a long line of Murray’s behind them, too, stretching back far in time.

In Mills’ book there is an African proverb quoted:

When an old man dies, a library burns to the ground.

All the acquired knowledge and wealth of life experience, gone. I get that.

I am by no means an old man, still in my early forties, but as the unacknowledged (by default) historian of my family, I often think that I should start writing down the things that my grandparents and other elders told me, along with the stories that I have discovered in the pursuit of uncovering the lives of my ancestors. Because if I leave it too late, all of that information would be lost, to my children and their children. The struggles; the triumphs. All gone.

It would indeed be like a library burning down.

I finished the book in two days. And, after the loooong wait, I loved it.

But it has to be read not as a To Kill A Mockingbird sequel, or prequel, but as a stand-alone novel, albeit with familiar characters. Perhaps that will negate the sense of expectation for you-but I doubt it! 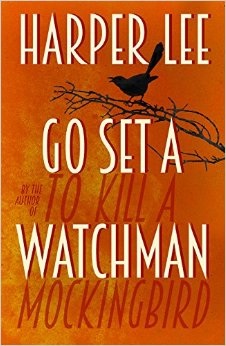 The book is still concerned with the racism of the south at a certain moment in time, but instead of being seen through the innocence of the child Scout, it is now seen through the scathing judgement of the adult Scout: Jean Louise Finch.

It is in effect the first draft of what my favourite book evolved from, and so we must remember that the characters changed and evolved too.

For those of you who hold Atticus in such high esteem, you should maybe be prepared to have your figure of ideal rocked, although it is not so black and white (pun not intended). His brother, on page 265, gives a speech to Jean Louise about her father which he could so easily be giving to any of us who have admired this fictional character for so long.

After being so elated and thankful for the chance to read something-anything-else by Harper Lee, I find myself being greedy again, wishing that she had written more books. Perhaps the one that was meant to be the follow up to To Kill A Mockingbird about someone hunting deer, which was allegedly stolen shortly before completion.

It is up to you if you want to run the risk of shattering the image of your literary heroes and ideals, but I enjoyed it. My copy is already promised to the Polish guy who runs the coffee shop in which I read it in this morning. Might be worth a Latte or two.

Earlier this week we went to the opening night of To Kill A Mockingbird at the Lowry Theatre. The Lowry is in Salford. I always think, a little irrationally, of Salford as Manchester. But Salford is Salford, separated from Manchester by the river Irwell. Some think this fact important, not least half of the local football fans.

But anyhow, we are neighbours.

I must have have been attending the play with the only two people in the audience, if not the world, who have not read the book: my wife and a friend. So I gave them a brief synopsis on the way, checking in the rear view mirror for the slightest hint of any eye-rolling, telling them that I would ask questions afterwards. Hard task master that I am.

On reaching the theatre, I asked my wife what the name of the family cook and housekeeper was. I figured that ‘Calpurnia’ was unusual and exotic enough to either stick in her memory, or be totally beyond her recall. Her reply gave me something to greet the usher with as she took our tickets at the door:

“Hi, this is my wife. She is very cultured and has read the book six times. She would like to know who is playing Pocohontas?”

I received a dig in the ribs ( from the wife, not the usher), and we took our seats. Thankfully, the play was true to the book, the cast members even reading passages from paperback copies throughout. I guess if the book is considered such a masterpiece, why risk changing things? The only thing added, quite effectively, was a folky soundtrack by Phil King, who sang several pieces accompanied by acoustic guitar and harmonica.

The child actors were good, and the guy who played Atticus deserves particular mention. It was a great production, and the courtroom scenes were quite powerful, with Atticus addressing us, the audience as the jury. He convinced me. When poor Tom Robinson was found guilty I was tempted to jump to my feet and demand a retrial. Either that or another drink.

At the end, my friend took a surreptitious snap of the cast receiving deserved acclaim.

Feeling like he had broken the law, this is the first time that he doesn’t want a photo credit on my blog. No problem, Derek.

One last little connection on the late journey home: what do you think we listened to on the car radio? Why, Wake Up Boo! by the Boo Radleys, of course. If you don’t understand this, it is high time you read the book. And remember: I will ask questions.

And keep those eyes still.

I’ve just been blown away by the news that I’ve just heard, and I am usually the most calmest of Jackdaws.

To Kill A Mockingbird is my favourite book of all time, and I have long since reconciled myself to the fact that Harper Lee was not going to have any more books published. The frustration of this is up there with the split up of The Beatles, the deaths of John Lennon and Jeff Buckley, and the abandonment of poetry by Arthur Rimbaud at the age of twenty one. Oh, and also my inability to master the guitar.

But now I have heard that there is a new Harper Lee book to be published, the book that she originally wrote in the 1950’s and put aside on the recommendation of her publisher. It seems that this book is set twenty years after Mockingbird, and deals with the adult Scout grappling with personal and political issues on returning to Maycomb after visiting her father, Atticus, (that long-held ideal of fatherhood) in New York.

My #1, discerning reader that I am.

Apparently this book, entitled Go Set A Watchman, was written first, but when the publisher was taken with Scout’s childhood flashbacks, he or she persuaded Lee to tell that story instead, and so To Kill A Mockingbird was born. But now, sixty years later, that original manuscript has been discovered, and is being released on July 14th. A sequel to Mockingbird, but written first.

I really don’t know how to feel about this. I have never been so excited about the release of a book in my life, but that excitement is also laced with fear. Fear that, after all this time, that first book will not measure up. That, unexpected though this new book is, it will somehow fall short of a book that has to many, I included, set an impossible standard to follow.

I’m going to read it, of course I am. How could I not? But as that publication date nears, I fear that it is going to scare the hell out of me. I can already hear my wife:

But I have waited for this since I was an awkward sixteen year old in my English Literature class.

Our marriage is going to be sorely tested.